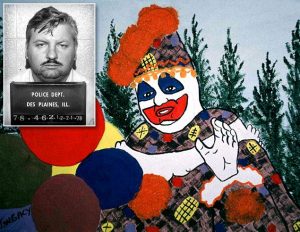 In 1982, while Gacy was on Illinois’ Death Row for the rape, torture, and murder of 33 boys and young men during a six-year spree, he acquired a box of paints. He used these paints to produce over 2,000 canvases in a sustained burst of artistic activity that only ended with his execution by lethal injection in May 1994. Most of these pieces found buyers despite their provenance, quality, and subject matter. A few months before his execution, the Tatou Art Gallery in Beverly Hills, CA offered up three dozen of his paintings for sale. Many of these canvases depicted human skulls. Others were self-portraits of the serial killer dressed as “Pogo the Clown,” a persona that Gacy adopted when he worked at children’s parties, where he allegedly met some of his victims. The curator described the paintings as examples of “art brut,” or art by the criminally insane, a subgenre of folk art. The most expensive piece was one of Pogo as an open-mouthed clown with fangs. The price: $20,000.

Illinois sued Gacy in October of 1993 to prevent him from profiting from the sale of his artworks, but an auction of them was held in May of 1994, soon after his execution. Six paintings were put on the block and successfully bid upon by two businessmen. The subjects of this lot of paintings included Elvis, several clowns (including Pogo), skulls pierced by bloody daggers, and a prisoner escaping from a jail cell after using a pickaxe to cut a hole in the cell’s wall.

In 2011, the Arts Factory gallery in Las Vegas, NV, launched a commercial exhibition titled “Multiples: The Artwork of John Wayne Gacy.” The prices ranged from $2,000 to $12,000 apiece. Elvis and skulls made another appearance, and were joined by a portrait of Charles Manson and what were described as “card-ready flowers and birds.” The gallery planned to donate the proceeds to several charities, including the National Center for Victims of Crime. The Center, however, sent a cease-and-desist letter to the Arts Factory, despite the gallery owner’s insistence that he was trying to “help from something that was bad.”