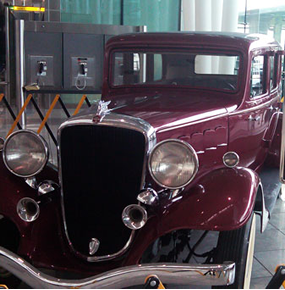 The Crime Museum periodically lends out artifacts and exhibits to tour both locally and nationally. Visit this page frequently to see what artifacts are making their way around the country.

This 1933 Essex was purchased by Public Enemy #1 John Dillinger in March 1934 from the Potthoff Brothers Motor Company in St. Paul, Minnesota. On March 31, 1934 Dillinger and his girlfriend Evelyn Frechette escaped police at the Lincoln Court Apartments in St. Paul. During the shoot out with the police, Dillinger took a bullet in his left leg and two slugs (.32 or .38 caliber fired from a service revolver) remain in the front cowl panel of the car from this shoot out. Dillinger used the car until April 7, 1934, when he and his brother, Hubert, crashed the car in a field.

If you would be interested in displaying this or another artifact at your facility, please email artifacts@crimemuseum.org.