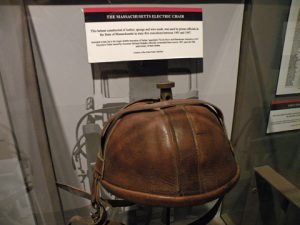 Arguably the most famous event in the history of death by electrocution occurred on August 23, 1927, in a state prison in Charlestown, MA. A jury had convicted Nicola Sacco and Bartolomeo Vanzetti of murder and robbery in 1921, but a series of appeals and protests had postponed their deaths for six years. In the 1920s, when their trial took place, discrimination against immigrants and radical thinkers ran rampant. As Italians and anarchists, Sacco and Vanzetti fit both of these descriptions.

Additionally, the police failed to find substantial evidence confirming their guilt, which led some people to believe that their nationality and political views were the real reason they were on trial. The men appealed their case a number of times, and another man, Celestino Madeiros, even admitted to committing the crime, but their luck had run out. Judge Webster Thayer sentenced Sacco and Vanzetti to death by electric chair. They both died wearing this helmet.

When a criminal is to be electrocuted, their head and legs are shaved. Their eyebrows and facial hair may also be trimmed off to reduce the odds of the prisoner catching fire. Once the prisoner is fastened into the chair, a sponge dipped in saline solution is laid on top of their head to encourage conductivity. A single electrode is affixed to their head, and another is connected to one of their legs to complete the closed circuit. The prisoner receives two jolts of current: the length and intensity is dependent on the person’s physical condition. Generally, the first surge of approximately 2,000 volts lasts for as many as 15 seconds. This usually causes unconsciousness and halts the victim’s pulse. Next, the voltage is turned down. At this point, the prisoner’s body reaches up to 138°F, and the uninterrupted electric current causes irrevocable damage to his or her internal organs. The electric current burns the prisoner’s skin, forcing prison employees to peel the dead skin from the electrodes.

After close to 50 years of use, the state finally put the electric chair to rest along with the death penalty. The State of Massachusetts’ final use of capital punishment was documented in 1947.

*Please note that this exhibit is currently not on display.*