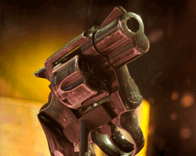 This Lawman MK III snub-nose revolver is famous for its appearance in the epic film The Godfather, released to critical acclaim in 1972. Ellis Props & Graphics of Hollywood provided this prop pistol to The Godfather for studio use only; while the gun is functional, it has no firing action to prevent accidental harm. The Godfather features this gun in one particular scene wherein Sonny Corleone (portrayed by actor James Caan) takes this gun out of a drawer and slips it into the waistband of his pants for protection prior to checking who’s at the door.

The Godfather is based on Mario Puzo’s 1969 novel of the same title. The film, directed by Francis Ford Coppola, features an all-star cast including Marlon Brando, Al Pacino, James Caan, Robert Duvall, and Diane Keaton. Its storyline follows the Italian mafia family, the Corleones, for a decade between 1945 and 1955. Ranked second behind Citizen Kane on the American Film Institute’s top-100 list, The Godfather won Academy Awards for Best Picture, Best Actor, and Best Adapted Screenplay.

Sonny Corleone, an extremely volatile man, is mob boss Vito Corleone’s eldest son. Sonny’s dedication to the crime family earns him the right to take over as the Don when his father is almost taken out in an assassination attempt. Knowing Sonny’s hotheaded nature, a rival Don lures Sonny into a trap when Sonny hears of his sister Connie’s vicious beating inflicted by her husband. In a rage, Sonny leaves for Connie’s apartment to seek revenge. Instead, Sonny is ambushed en route and shot to death in a bloody massacre.