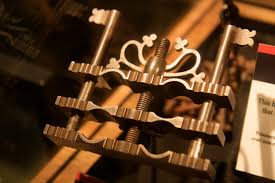 Venetian finger screws originated in the Venetian Republic, an Italian state that existed from the late 700s through 1797. While the Venetian Republic began in what is now Venice, Italy, it eventually spread through northeastern Italy and along the west coast of the Adriatic Sea. The heyday of the Venetian Republic coincided with the Middle Ages, which was an incredibly dark period, notorious for religious wars and cruel methods of torture.

Venetian finger screw was a very simple contraption that was similar to a vise. Instead of a vise’s flat surface, however, it contained two circular openings intended for the insertion of a finger. Once the victim’s fingers were in place, the torturer would tighten the screw until each fastened finger felt intense pressure. The overseer of the torture would continue to constrict the device until the pain was so great that it forced a confession out of them. Those who resisted the torture suffered pulverized bones and destroyed fingers.

Depending on the perceived crime, once the torturer released the victim from the finger screws, they would sometimes subject them to even more horrifying torture techniques.

Despite Venetian finger screws’ dark and sickening nature, many metal forgers who created them added their own artistic flourish. In an attempt to incorporate a bit of elegance into such a sadistic apparatus, some metal forgers included ornamental cast iron wing nuts or decorative scrolled edges on the pressure plates.