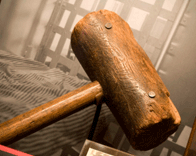 This ice mallet is responsible for killing Ben “The Tall Texan” Kilpatrick, one of the last well-known outlaws of the old Wild West. While his exact birth date is unknown, records show Kilpatrick was born sometime around 1877 in Concho County, Texas. Kilpatrick left his life as a cowboy behind at an early age to join a gang of outlaws that included siblings Thomas “Black Jack” Ketchum and Sam Ketchum, in addition to William Carver. Following a botched train robbery in New Mexico, Kilpatrick and Carver traveled to Utah and joined forces with Butch Cassidy’s “Wild Bunch.”

On August 29, 1900, Kilpatrick, Butch Cassidy, The Sundance Kid, Harvey Logan, and Carver held up a Union Pacific train in Tipton, Wyoming. Then, on September 19, they held up First National Bank in Winnemucca, Nevada, escaping with over $32,000. In early 1901, the gang hit up a Great Northern train on the outskirts of Wagner, Montana for $65,000. In the spring of 1901, upon Kilpatrick and Carver’s return to Texas, Sheriff Elijah Briant and his deputies attacked Carver in Sonora, TX. Carver died within three hours due to gunshot wounds. In the meantime, Kilpatrick and Carver’s former girlfriend, Laura Bullion, became involved and were on the run to St. Louis, Missouri.

By November 8, 1901, authorities caught up with Kilpatrick and Bullion and threw them in jail. Kilpatrick was convicted of robbery and received 15 years; Bullion was sentenced to five. After serving a reduced sentence, Kilpatrick left prison by June 1911 and wasted no time returning to his degenerative lifestyle.

In March 1912, Kilpatrick boarded a Southern Pacific Express train near Sanderson, Texas, alongside a former inmate whom he had befriended. Attempting a robbery, Kilpatrick held up the express messenger, David Trousdale, in the Wells Fargo baggage and mail car. While Kilpatrick looted the safe and any other valuables he could find, Trousdale managed to hide the ice mallet underneath the back of his jacket. Thinking on his feet, Trousdale told Kilpatrick that there was a valuable package lying on the ground. Kilpatrick rested his rifle against his leg while he leaned over to pick up the package. As he did, Trousdale pulled the mallet from beneath his coat and struck Kilpatrick three times in the back of the neck and head. Kilpatrick died instantly of a broken neck and crushed skull. The beating with the mallet was so brutal that Kilpatrick’s brains stained the walls of the car.

F.J. Dodge, an officer with Wells Fargo involved in the investigation of the attempted robbery, is responsible for preserving this ice mallet, telegrams, and other documents related to this incident.

*Please note that this exhibit is currently not on display.*