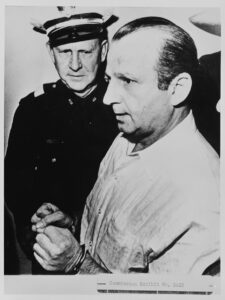 Jack Ruby was known for managing strip clubs in the Dallas area. On the day President Kennedy was assassinated, Ruby was reportedly impersonating a news reporter during a press conference. It was at the press conference where Ruby initially planned on shooting Oswald. Two days after this alleged unsuccessful attempt, Ruby entered the Dallas police headquarters basement and shot Oswald in the abdomen. This shot led to Oswald’s death and the arrest of Ruby.

During the murder trial, Ruby claimed that he was suffering from psychomotor epilepsy, also called temporal lobe epilepsy because of where it is located in the brain. Defense attorney Melvin Belli stated that this condition caused Ruby to black out and subconsciously shoot Oswald. Ruby was found guilty of first-degree murder of Oswald and sentenced to death by electric chair. In 1966, the Texas Court of Appeals reversed the decision. Later in 1967, Ruby died of lung cancer.

Many conspiracy theorists believed that Ruby played a greater role in the assassination of President Kennedy. Ruby denied any involvement of a conspiracy but stated that it was an impulsive act while under the influence of prescription drugs. There were wide reports that Ruby left his dog in the car to support his argument that the shooting was not planned.

In 1964, the Warren Commission, established by President Lyndon Johnson stated that Lee Harvey Oswald and Jack Ruby did not conspire together to assassinate President Kennedy.