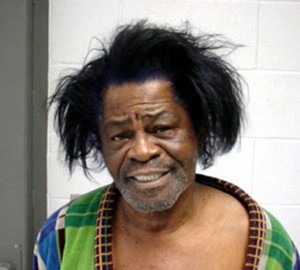 James Brown, the “Godfather of Soul,” was arrested a few times throughout his life. His most well-known arrest was in 1998, for failing to stop for a police officer in a two-state car chase. In court, Brown’s lawyer, Bill Weeks, argued that police overreacted in their pursuit because of his celebrity status. Brown told the court that he fled because he was “scared for his life” and that he greatly respected law enforcement but in the chase he tried to ram his car into two police cars. Ultimately, he was found guilty by a jury and sentenced to six years in jail for two counts of aggravated assault and eluding the police. The judge offered for Brown to instead pay a $6,000 fine and serve five years of probation or spend six months in jail, but in the end he served 15 months in prison and 10 months in a work-release program before being paroled in 1991. In 2003, Brown was pardoned for his crimes and reports say he sang “God Bless America” upon hearing the news.

In 2004, Brown was arrested in Aiken County, South Carolina after reports of domestic violence. When police arrived, they saw Brown push his wife to the ground; upon examination of Tomi Rae Brown, they also found many bruises and scratches consistent with her accusations. Police arrested Brown and took this infamous mugshot. In court, he pled no contest and was given a fine of just $1,000.