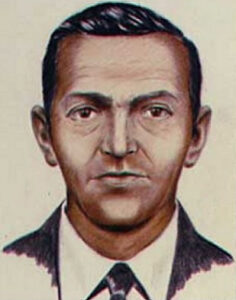 Dan “D.B.” Cooper became legend on the eve of Thanksgiving in 1971. Since that night, police have failed to find him dead or alive after he jumped from an airplane mid-flight.

Around 4:00 p.m. on November 24th, a man calling himself Dan Cooper entered Portland International Airport and purchased a one-way ticket to Seattle-Tacoma Airport for $20. He was assigned an aisle seat, 18C, for a 4:35 p.m. flight. The plane carried 36 passengers that day, not including: the pilot, Captain William Scott, the first officer Bob Rataczak, the flight engineer H.E. Anderson, and two flight attendants, Tina Mucklow and Florence Schaffner.

An accent-less, middle-aged, white male in a dark suit and tie, Cooper drew little attention boarding the flight. After takeoff, Cooper handed Schaffner a note. At the time, men traveling alone commonly slipped phone numbers or hotel room numbers to flight attendants, so Schaffner placed the note in her pocket and ignored it. The next time she passed, Cooper motioned for her to come closer. He told her that she better read the note and warned that he had a bomb, nodding towards his suitcase. Schaffner then went to the galley to read the note. She showed it to the other flight attendant and together they hurried to the cockpit to show the pilot. After he read the note, the pilot immediately contacted air traffic control. They in turn contacted the Seattle police, who informed the FBI. The FBI placed an urgent call to the airline’s president, Donald Nyrop, who said they should comply with Cooper’s demands. Doubtless, Nyrop wanted to avoid any negative publicity that such a disaster would bring.

Cooper instructed the flight attendant to return the note, wary of potentially incriminating evidence. Because of this, the exact wording of his note is unknown. Schaffner recalled that the handwritten ink note demanded $200,000 in cash and two sets of parachutes. Cooper wanted these items delivered on arrival at Seattle-Tacoma Airport, and claimed that if they didn’t comply with these demands, he would blow up the plane. Everyone who read the note agreed that it contained the phrase “no funny business”. 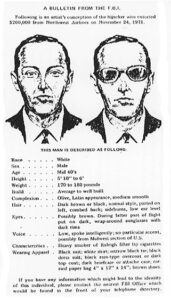 Cooper moved next to the window so that when Schaffner returned, she sat in his aisle seat. He opened his suitcase wide enough for her to get a glimpse of wires and two cylinders, potentially dynamite sticks. He then directed her to return to the cockpit and to tell the pilot to stay in the air until the money and parachutes were ready. After receiving the message, the pilot announced over the intercom that the jet would circle before landing due to a mechanical problem. Most of the passengers were unaware of the hijacking.

Cooper was very precise about his demands for money. He wanted the $200,000 in $20 bills, which would weigh around 21 pounds. If smaller bills were used, it would add extra weight and could be dangerous for his skydive. Larger bills would weigh less, but they would be more difficult to pass. He even specified that he wanted bills with serial numbers that were random, not sequential. The FBI agents gave him bills with random serial numbers but made sure that all of them began with the code letter L.

Acquiring the parachutes was a lot harder than collecting the $200,000. Tacoma’s McChord Air Force Base offered to provide the parachutes but Cooper rejected this offer. He wanted civilian parachutes with user-operated ripcords, not military-issued ones. Seattle cops eventually contacted the owner of a skydiving school. His school was closed but they persuaded him to sell them four parachutes.

Cooper’s hijacking note did not directly explain his plan to skydive from the plane but his demands led officials to that assumption. Since he had asked for an extra parachute, they assumed he planned to take a passenger or crew member with him as an airborne hostage. They thought about using dummy parachutes for the exchange with Cooper but they couldn’t risk the life of a civilian.

An FAA official contacted the captain and asked Cooper for permission to come aboard the jet. The official apparently wanted to warn him of the dangers and consequences of air piracy. Cooper denied his request. Cooper had Mucklow read over the instruction card for operation of the aft stairs. When he questioned her about them, she said she didn’t think they could be lowered during flight. He said she was wrong.

Cooper had chosen this flight not only for location, but because of the type of jet that was used. He knew a lot about the Boeing 727-100. Cooper ordered the pilot to remain below an altitude of 10,000 feet and to keep the airspeed below 150 knots. An experienced skydiver would easily be able to dive at 150 knots. The jet was lightweight and would have no problem flying at such a slow speed through the dense air at 10,000 feet.

Cooper told the crew that he wanted to go to Mexico City. The pilot explained that at the altitude and airspeed he wanted to travel, the jet wouldn’t be able to travel more than 1,000 miles even with 52,000 gallons of fuel. With this in mind, they agreed to make a mid-stop to refuel in Reno, Nevada. Before leaving Seattle, Cooper ordered the jet be refueled. He knew that the Boeing 727-100 could take in 4,000 gallons of fuel a minute. After 15 minutes, when they weren’t done refueling, Cooper demanded an explanation. The fuel crew completed the job shortly afterwards. Captain Scott and Cooper negotiated a low-altitude route called Vector 23. This route allowed the jet to fly safely west of the mountains even at the low altitude that Cooper demanded.

Cooper also directed the captain to depressurize the cabin. He knew that a person can breathe normally at 10,000 feet, and that, if the cabin had equalized pressure inside and out, there wouldn’t be a violent gust of wind when the aft stairs lowered. After all of the flight details were figured out, the plane took off at 7:46 p.m.

After takeoff, Cooper ordered the flight attendant and the rest of the crew to stay in the cockpit. There was no peephole in the cockpit door or remote cameras installed at the time, so the crew had no idea what Cooper was doing. At 8 p.m., a red light gave warning that a door was open. Scott asked Cooper over the intercom if there was anything they could do for him. He replied with an angry “No!” That was the last word anyone ever heard from Dan Cooper.

At 8:24 p.m., the jet genuflected as the nose dipped first followed by a correcting dip in the tail end. Scott made sure to note the spot where the dip took place, 25 miles north of Portland, near the Lewis River. The crew assumed that the aft stairs had been lowered and that Cooper had jumped. However, they didn’t make confirmation of their assumption because they didn’t want to disobey his orders to stay in the cockpit.

At 10:15 p.m., the jet landed in Reno, Nevada. Scott spoke over the intercom and after receiving no response, he opened the cockpit door. The cabin was empty. Cooper, along with the money and all of his belongings, was gone. The only item left was the second parachute.

No one ever heard from Cooper again. All subsequent investigations failed to prove whether or not he survived his fateful jump. During the hijacking, the police attempted to follow the plane and wait for someone to jump. While they originally used F-106 fighter jets, these planes, built to go at high speeds up to 1,500 MPH, proved to be useless at lower speeds. The police then co-opted the Air National Guard Lockheed T-33, but before they were able to catch up to the hijacked plane, Cooper had already jumped.

The inclement weather that night prevented the police from searching the grounds until the next day. That Thanksgiving, and for several weeks afterward, the police performed an extensive search that failed to turn up any trace of the hijacker or the parachute. The police began searching criminal records for the name Dan Cooper, just in case the hijacker used his real name, but had no luck. One of their early results, however, would prove to have a lasting impact on the case: a police record for an Oregon man named D.B. Cooper was discovered and considered a possible suspect. Although he was quickly cleared by the police, an eager and careless member of the press accidentally confused that man’s name for the alias given by the hijacker. This simple mistake was then repeated by another reporter quoting that information, and so on and so on until the entire media was using the catchy moniker. And so, the original “Dan” Cooper became known as “D.B.” for the rest of the investigation. 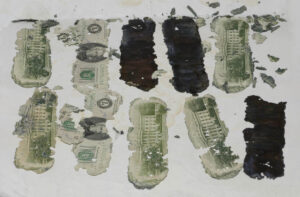 Charges for air piracy were filed in 1976 and still stand today. On February 10, 1980, an 8-year-old boy found bundles of $20 bills with serial numbers matching the ones from the Cooper stash in the Columbia River. Some people believe this evidence helps support the theory that Cooper didn’t survive. The discovery of these bundles led to new searches around that area. However, an eruption of Mt. St. Helens on May 18, 1980, likely destroyed any remaining clues about the Cooper case.

Over the years, many have confessed to being Dan Cooper. The FBI has quietly examined some of these cases, but has yet to turn up anything useful. They check the fingerprints of those who confess against the unknown prints collected from the hijacked plane. So far, none of them have been a match.

In August 2011, Marla Cooper made claims that Dan Cooper was her uncle L.D. Cooper. Marla claimed that she overheard a conversation saying their money problems were over and that they had hijacked a plane. Somewhat contradictory, however, she also explained that no money was ever recovered, since her uncle lost it while he was jumping. Although many people have identified Dan Cooper as one of their long-lost relatives, Marla Cooper’s claims seem to come closest to the truth: one of the flight attendants on that flight even identified L.D. Cooper as looking similar to the hijacker. This theory, however, is still not one the authorities deem likely.

In July of 2016, the FBI officially announced they would no longer be allocating active resources to continuing the D.B. Cooper investigation. This did not mean that they had solved the case of Cooper’s identity though. The leading theory by the investigators is that Cooper did not, in fact, survive his jump. Although his extensive knowledge of the plane’s systems initially led police to believe he was a professional skydiver, they have since concluded that a jump in such weather conditions, over a ruthless patch of Washington wilderness in the middle of winter, while wearing business casual attire was a risk no expert would be stupid enough to take. The fact that the bag of matching ransom money was found left in the stream further supports the theory that he did not survive. And so, despite 45 years’ worth of tips and theories, the real name of America’s most famous hijacker remains a mystery.