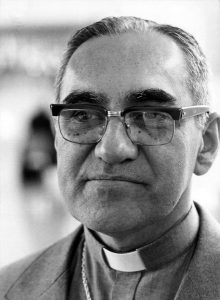 Óscar Arnulfo Romero y Galdámez was a Roman Catholic priest in El Salvador who was assassinated on March 24, 1980.

Óscar was ordained in 1942 and rose to Archbishop of San Salvador in 1977. He became a strong defender of impoverished people and called for making injustices right. As Romero became more and more popular, people began listening to his sermons on the radio. He denounced war in El Salvador and the leaders who had created it. People called him the “Voice of the Voiceless” for saying the things that no one else could – the truth about the injustices.

In 1979, there was a coup d’état, which means an overthrow of government; typically unconstitutional seizure of power by a dictator, the military, or a political faction. At first, Romero supported it, but they persecuted the Catholic Church, and he asked the US to help in a famed open letter to Jimmy Carter in 1980.

On March 24, 1980, Romero was shot in a chapel while he celebrated Mass. No one was ever convicted for this heinous crime, but the United Nations’ Truth Commission for El Salvador did their own investigating and concluded that Roberto D’Aubuisson had given the order. D’Aubuisson was a death squad leader and an extreme-right wing politician. In 1997, Romero was given the title of Servant of God by Pope John Paul II.