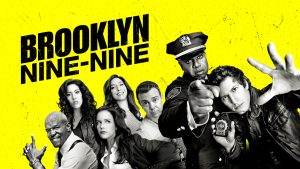 Brooklyn Nine-Nine, is a single-camera sitcom on FOX starring Andy Samberg and Andre Braugher. It won two Golden Globesfor Best Comedy and Best Actor (Andy Samberg). This recognition and acclaim was a shock to many, including the cast, as the show did not garner an extraordinarily large viewership throughout its first season.

The premise of Brooklyn Nine-Nine revolves around the fictional Ninety-Ninth Precinct of the New York City Police Department in Brooklyn, New York. Jake Peralta (Samberg) is a talented yet wacky detective who comes in to conflict with the stoic Ray Holt (Braugher) when he is appointed captain of the Ninety-Ninth Precinct. The show follows the relations between the detectives of the precinct and how they solve cases that enter the precinct.

Brooklyn Nine-Nine was created by Dan Goor and Michael Shur, whose past credits include Parks and Recreation, which stars Amy Poehler.