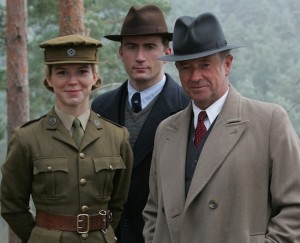 Foyle’s War is a British crime drama created by Anthony Horowitz that began airing in 2002. Foyle’s War is set during World War II, and focuses on crime in Southern England. The series stars Michael Kitchen as Christopher Foyle, Honeysuckle Weeks as Samantha Stewart, and Anthony Howell as Paul Milner. Christopher Foyle wants to fight for his country, but after he is told that he must stay where he is – the south coast – he finds himself solving the most complex crimes, along with the help of his driver, Sam Stewart, an amateur sleuth.

Despite the series’ longtime airing period, only 28 episodes have been produced; each season has fewer than five episodes. The series concluded with season eight, with the final episode airing on February 16, 2015.

Foyle’s War won one award: a Lew Grade Award at the BAFTA Awards in 2003. It was nominated for three other awards. Although Foyle’s War is critically acclaimed – indeed, the Wall Street Journal called it “a triumph from start to finish” – it has not garnered much popularity. Even though all eight seasons have aired, they are not all available in the United States due to its dwindling popularity.

Foyle’s War is currently available to stream on Amazon Instant.