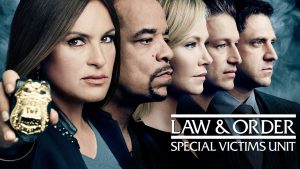 Law & Order: Special Victims Unit is a police procedural drama on NBC. It is a spin-off from the original Law & Order (1990-2010), both created by Dick Wolf, the show has been on the air since 1999, completing 18 seasons and 413 episodes as of May 3, 2017. It is currently the longest running scripted non-animated U.S. primetime TV series.

The victims in the show are often, but not always, murdered, and often their testimony is crucial to the ongoing investigations. The show is often challenged as portraying crimes that are “ripped from the headlines” and have occurred in real life, with only a few details changed.

Law & Order: Special Victims Unit has received many awards and award nominations from critics and fans. Mariska Hargitay has been nominated twice for a Golden Globe Award and won once in 2005, as well as nominated 8 times for an Emmy Award for Outstanding Lead Actress in a Drama Series, winning in 2006.