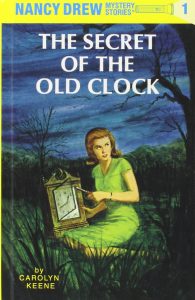 The Nancy Drew books are a series of books starring child detective Nancy Drew. The series was written by a pseudonymous author, Carolyn Keene. The series started in 1930, with the main series, Nancy Drew Mysteries, running until 2003. There are many other spin-off book series by different authors using the same pseudonyms.

The books focus on Nancy’s misadventures, along with the relationships between her and her best friends, Bess and George; her boyfriend, Ned Nickerson; her father, Carson Drew; and their housekeeper, Hannah.

The first book in the series, The Secret of the Old Clock, introduces all the above mentioned characters, and it shows Nancy solving her first case. Each book starts by introducing Nancy and describing her, as well as noting her last case (except in the first book), and ends with the name of the next mystery.

The books have inspired other spin-offs as well, such as the Nancy Drew Games, a 2007 movie starring Emma Roberts, and the 2019 TV series by of the same name.