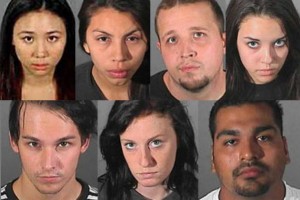 In 2008 and 2009, several celebrities in Hollywood became victims to a series of burglaries. They became the first/most successful ring of burglaries in Hollywood history. There have been several names given to the group of teenagers convicted of taking part in these burglaries, including, “The Burglar Bunch” and “The Bling Ring,” and for a year, celebrities in the Los Angeles area grew terrified of becoming the next victim.

The Burglars
Rachel Lee was the alleged leader of the Bling Ring. Lee attended Indian Hills, an alternative high school, after she was expelled from Calabasas High School. Lee had a history of stealing, since she had shoplifted $85 worth of merchandise from a Sephora store with Diana Tamayo, another alleged member of the ring, several months before the first burglary. 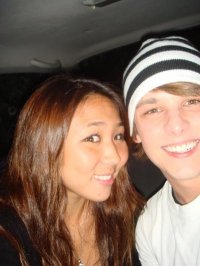 Nick Prugo met Lee when they were both attending Indian Hills. The two were fast friends, and bonded over their love of celebrity life and fashion. Eventually, Prugo joined Lee and her friends in their partying lifestyle and soon became addicted to drugs. The first burglary happened while Prugo and Lee were still in high school, and had decided to break into the home of a classmate who was out of town. Prugo and Lee also had a habit of entering unlocked cars parked on the streets of Hollywood, and stealing cash and credit cards inside. The pair would then spend the money on shopping sprees on Los Angeles’ infamous Rodeo Drive.

Alexis Neiers is arguably the most well known of the alleged members of the Bling Ring, due to her E! reality show, Pretty Wild, which was in the process of filming when she was arrested. Neiers was friends with Prugo and Lee, though she was homeschooled. Alexis met the two through her friend Tess Taylor, who Neiers’ family had taken in as their own several years earlier. Neiers and Taylor thought of each other as sisters.

Diana Tamayo was the student body president at Indian Hills, and received a $1,500 ‘Future Teacher’ scholarship upon her graduation in 2008. Allegedly, Tamayo’s family had illegally immigrated to the United States when she was a child, which was used against her during questioning. About a year after her graduation, Tamayo and Lee were arrested after shoplifting about $85 worth of merchandise from a Sephora store. Both were charged with fines and sentenced to a year of probation. Courtney Ames, the stepdaughter of famed boxer Randy Shields, was a friend of Lee, and introduced the rest of the group to Johnny Ajar and Roy Lopez.

Johnny Ajar, nicknamed “Johnny Dangerous”, was Ames’ boyfriend and sold a number of the items stolen by the ring. Ajar was not believed to have taken part in any of the burglaries, and had already had a prison record for drug trafficking. Roy Lopez worked with Ames at a Calabasas restaurant, and sold stolen items in addition to participating in at least one of the burglaries of Paris Hilton’s home, from which he allegedly stole $2 million in jewelry.

The Burglaries
The first victim of the Bling Ring was Paris Hilton, who was first robbed in December of 2008. Lee and Prugo decided on Hilton because they believed that she would leave her door unlocked. When they arrived, they found Hilton’s spare key under her front door’s welcome rug, though the door was unlocked. The pair entered the home and began searching through the heiress’s clothing, jewelry, and money, and only took a small number of belongings, to make the burglary less obvious. The group returned to Hilton’s home at least four more times, though she did not realize it had happened until about $2 million in money, designer clothing, and jewelry went missing. They burglarized Hilton so many times that Lee reportedly added Hilton’s spare key to her own keychain.

On February 22, 2009, the night of the Academy Awards, the group burglarized the home of reality star Audrina Patridge and stole $43,000 of Patridge’s property. Unlike the Paris Hilton burglaries, Patridge immediately knew that she had been burglarized and posted footage from her security camera on her own website. When the footage failed to lead to any arrests, the group continued their spree of celebrity burglaries. 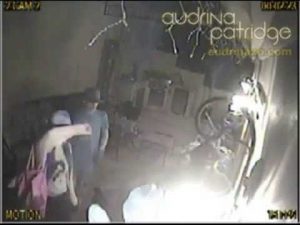 The Bling Ring also burglarized the home of The O.C star Rachel Bilson several times in the spring of 2009, and took nearly $300,000 of stolen goods. The burglaries had reached a point of normalcy for the ring, so much that Lee even felt comfortable enough to use Bilson’s bathroom during one of the heists. The ring eventually sold a number of Bilson’s belongings on the Venice Beach boardwalk.

On July 13, 2009, Prugo, Lee, Tamayo, and Neiers entered the home of Orlando Bloom and his then girlfriend, Victoria’s Secret model Miranda Kerr. This is the only burglary that caught Neiers on security footage. Neiers claims that this was the only burglary she was present for, she was intoxicated, and she did not know that a burglary was taking place. The group stole about $500,000 in items, including a collection of Rolex watches. In August of 2009, the group burglarized the home of former Beverly Hills 90210 cast member Brian Austin Green and his then girlfriend, Megan Fox. The group took clothing, jewelry, and Green’s .380 semi-automatic handgun, which was found in the home of Ajar at the time of his arrest.

On August 26, 2009, Lee, Prugo, and Tamayo entered the home of Lindsay Lohan, who, according to Prugo, was Lee’s “biggest conquest” and her “ultimate fashion icon”. The Bling Ring stole clothing, jewelry, and personal items all valued at around $130,000. After the burglary, Lohan released the security footage to media gossip outlet TMZ, which produced countless tips that ultimately led to the arrests of the members. The group also made plans to burglarize the homes of a number of other celebrities, including Ashley Tisdale, Hilary Duff, Zac Efron, Miley Cyrus, and Vanessa Hudgens but they were arrested before the plans could come to fruition.

The Bling Ring on Trial
Prugo was the first of the group to be arrested, after a confidential tipster told police that he and Lee were the individuals in the Lohan burglary footage. Initially, Prugo denied any involvement in the crimes, but after his anxiety took over and prevented him from sleeping and eating, he confessed to police, and reportedly confessed to more crimes than the police knew had been committed. After Prugo’s confession, Tamayo, Ames, Lopez, and Neiers were served search warrants and arrested, and were charged with residential burglary. Ajar was arrested and charged with drug possession, possession of a firearm, and possession of ammunition, for which he pleaded not guilty. He was later charged with selling cocaine, possession of a firearm and receiving stolen property, which he pleaded no contest to and was sentenced to three years in jail. He was released in March 2011, after serving less than a year. 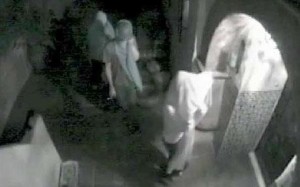 By this time, Lee had retreated to her father’s home in Las Vegas and was arrested there. When police arrived at her father’s house, they found a number of stolen items, including personal photos taken from a safe in Hilton’s house. Lee had believed that she had gotten rid of all the stolen items. Lee was charged with possession of stolen items. In court, Lee pleaded no contest to residential burglary, and was sentenced to four years in prison. After serving one year and four months, Lee was released in March 2013. 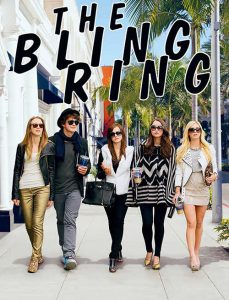 In June 2013, Sofia Coppola’s film The Bling Ring was released in theaters. The film chronicles the events surrounding the group, and was based on the article, “The Suspects Wore Louboutins,” written by Nancy Jo Sales, which eventually became a book. Sales had interviewed a number of individuals associated with the crime spree, including Nick Prugo and Alexis Neiers.

Detective Brett Goodkin, one of the LAPD officers who assisted in the case, was offered a small role in the film, as the arresting officer of Nikki, the film version of Neiers. Since he had not been given permission to appear in the film, and he was paid for his role, Goodkin was subsequently investigated for his work with the film, which created a conflict of interest, as several of the accused members of the Bling Ring had not yet been sentenced. As a result, they received lighter sentences.