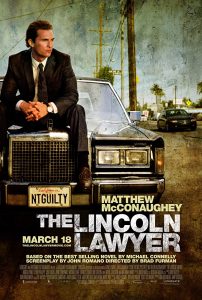 The Lincoln Lawyer is a 2011 crime thriller directed by Brad Furmanthat. The movie starred Matthew McConaughy, Ryan Phillippe, and Marisa Tomei. The story focuses on a defense attorney (McConaughy) who runs his law office from his car, a Lincoln Town Car. The story is based on a novel of the same name by Michael Connelly.

Matthew McConaughy stars as Mick Haller, the titular “Lincoln Lawyer”. A playboy realtor gets in trouble and tells Haller that he’s been accused of assaulting a prostitute. Eager to earn some easy cash, Haller takes the case. However, there’s a strange similarity between this case and one he’s worked on in the past. However, this case turns out to be far more complex than he ever thought it could be, and he finds himself trapped between what is true and what is right.