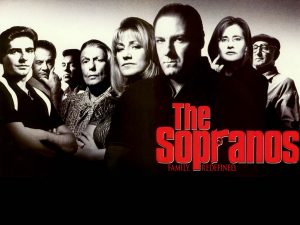 The Sopranos, created by David Chase, is a television series that chronicles the life of a fictional Italian-American mobster living in New Jersey, Tony Soprano (James Gandolfini). The show ran for six seasons on the premium cable network HBO, from 1999 to its finale on June 10, 2007.
The Sopranos tells the story of Tony Soprano’s life, and focuses on the difficulty of balancing his home life with his ties to a criminal organization. The show commonly features scenes of Soprano’s therapy sessions with his psychiatrist Jennifer Melfi (Lorraine Bracco).

The Sopranos has been regarded as the greatest television shows of all time by a number of publications, including the Writers Guild of America and TV Guide. The series has also won and been nominated for a great deal of awards.The Sopranos was nominated for multiple Primetime Emmy, Golden Globes, and Screen Actors Guild awards for every season. The Sopranos also cultivated a massive audience, and has achieved a cult following. Even though it aired on HBO, a premium network, The Sopranos managed to gain a larger audience than many of the most popular network shows that aired at the same time. Television critics have also greatly praised the show for its acting, writing, and directing.

The Sopranos is no longer airing new episodes, but it is in syndication on the A&E network. In addition, you can purchase the seasons on Amazon.