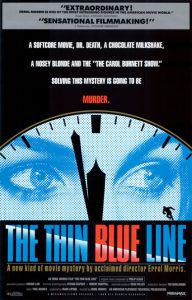 The Thin Blue Line is a documentary created by Errol Morris in 1988. The film’s premise revolves around Randall Dale Adams, a man who was wrongly convicted of murder and subsequently sentenced to life in prison.

Adams’ story begins after moving from Ohio to Dallas to find work. When Adams’ car ran out of fuel, the then sixteen-year-old David Ray Harris offered him a ride. Upon being stopped later that evening by a police officer because the car’s headlights were off, two shots from inside the car killed the officer who was approaching the vehicle containing Adams and Harris.

During the subsequent police investigation of the criminal case, Harris accused Adams of the murder, and pointed to evidence eventually used in Adams’ conviction. 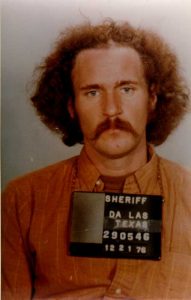 Errol Morris’ film was originally inspired by Morris’ fascination with Dr. James Grigson, known as “Doctor Death”. Grigson was a prosecution psychiatrist who was known for testifying in more than 100 trials that resulted in death sentences. After deeming Adams to be an incurable sociopath who would inevitably continue to be a menace to society if he was not given the death penalty, Morris grew suspicious, and took the film in a new direction. The finished piece presented a series of interviews regarding the investigation and reenactments of the shooting. Sources for the film included; the testimony of Adams and Harris, as well as various other witnesses and detectives connected to the case.

The title for the film was inspired by the closing argument made by the prosecutor during the criminal trial, who noted that there was a “thin blue line” separating ordered society from complete anarchy. 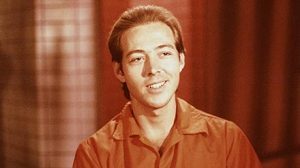 Approximately a year after the film’s release, Adams’ case was reviewed, which ultimately resulted in the reversal of his conviction. Despite being wrongly imprisoned for twelve years, Adams received no payment from the state of Texas. If this same case were to have occurred today, Adams’ would have supposedly received $80,000 for each year of wrongful incarceration. Adams past away on October 30, 2010, the result of a brain tumor. In regards to David Ray Harris, he was never charged in the case explored in The Thin Blue Line. However, Harris was later executed via lethal injection for the murder of Mark Mays, an unrelated crime.

The film was received extremely well, winning the award of Best Documentary from the New York Film Critics Circle and the National Society of Film Critics. Morris, the director, also won a number of awards recognizing his individual achievements, including the International Documentary Award, MacArthur Fellowship Genius Grant, and an Edgar Award.

Deemed by Variety in 2008 as being, “…the most political work of cinema in the last 20 years,” The Thin Blue Line changed the future of the field of documentary film-making. It is been selected for preservation by the Library of Congress in the United States National Film Registry for both its cultural and historical significance.