Twin Peaks is a drama that aired on ABC between 1990 and 1991. The show is set in a small fictional town, Twin Peaks, in Washington State. After the murder of Laura Palmer (Sheryl Lee), a teenage girl and town sweetheart, FBI Agent Dale Cooper (Kyle MacLachlan) arrives to investigate. Although Twin Peaks seems ordinary at first, Agent Cooper comes to realize that this small town is anything but. What seems obvious at first becomes muddled and unclear. It features eccentric and intriguing townspeople, and although it is a crime show, it does not always take itself too seriously, lending the drama a sense of humor.

Over two seasons, Agent Cooper investigates Laura Palmer’s death. However, partway through the second season, the truth is revealed, and the show takes a turn for the supernatural. 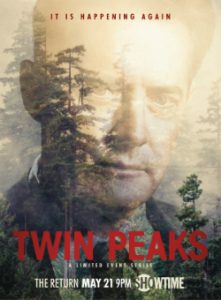 At first, the show garnered stellar reviews and drew many viewers. It was nominated for 42 awards and won 13, including a Golden Globe for Best TV series in 1991. During the second season, however, viewership declined rapidly, leaving ABC with no choice but to end the show after the second season. In 1992, a prequel movie was made, with poor to mediocre reviews from many major critics. Although the movie was not well received, it, like the show, achieved cult status.