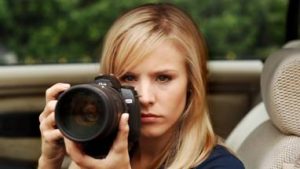 Veronica Mars is a teen-drama noir show created by Rob Thomas and aired on The WB for three seasons from 2004-2007.

The series follows Veronica Mars (Kristen Bell), a teenage private investigator who solves a wide-range of mysteries in the fictional town of Neptune, California. Once part of her high school’s popular crowd, Veronica struggles to pick up the pieces after the murder of her best friend. With the help of her father and some new friends, Veronica balances life as a modern-day Nancy Drew and regular-old teenage girl.

In March 2013, Bell and Thomas created a Kickstarter campaign to fund the creation of a feature film. Reaching out to longtime fans of the cancelled series, the campaign made headlines when the $2 million goal was raised in under ten hours. In total, the campaign raised $5.7 million and Thomas, Bell, and the rest of the cast and crew ofVeronica Mars went on to produce the movie sequel. The film opened in theaters on March 14, 2014 and received favorable reviews from critics.