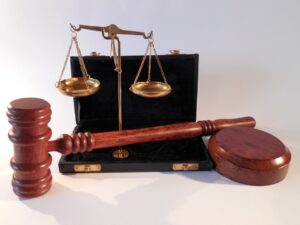 The criminal justice system is comprised of three separate divisions: police enforcement, the court system, and criminal corrections. When the police arrest a suspect who will be tried, the legal system must first determine the location where the case will be tried. The term jurisdiction describes the legal authority to hear a legal matter and make an official ruling. Jurisdiction establishes where each trial will take place. There are three separate factors to consider when deciding which court will try the case: geographic location, type of crime, and subject.

Location is the overriding circumstance that determines where cases are tried. Each state has jurisdiction over most legal issues that occur within their boundaries, although in some situations a federal court may take precedence. When a state does have authority over a case, jurisdiction is then determined by county, type of case being tried, and monetary amount involved. Once the legal system determines the area in which to try a case, it reviews the case and turns it over to a particular court. Municipal or Local Courts handle small matters that do not involve a large amount of money, misdemeanor hearings (although there are courts in some states that specifically deal with these crimes), and traffic violations. They also hold preliminary hearings for cases that include felony charges to decide whether or not there is enough evidence to send the matter to trial. District or Superior Courts take over felony cases after they are approved. Other matters heard in a State Superior Court include guardianships, divorces, and lawsuits that involve a large sum of money. State Superior Courts also review any disputes over the will of a deceased individual, although some states have courts that deal specifically with these matters.

Federal courts receive jurisdiction over bankruptcy appeals, maritime-related cases, lawsuits between two individuals who do not live in the same state, and other federal matters. Anytime a case involves a federal issue, the federal court has the authority to try that case. In some situations, both a federal and state court may have valid jurisdiction claims, and the lawyer who files the lawsuit chooses where the case will be heard. When this happens, the lawyer will determine which venue they feel will be more sympathetic to their cause or be able to start proceedings the earliest.

The highest court in most states is the State Supreme Court, which re-tries cases that have been appealed. Unlike other courts, they have the power to refuse to hear any case brought before them. This power, known as discretionary jurisdiction, means they can either approve a case, or have it sent to an appellate that must accept it. The United States Supreme Court is the highest court in the nation, and it has discretionary jurisdiction as well as original jurisdiction, which gives it the ability to take over cases that have not yet been tried in a lower court. This is very rare, and generally involves disputes between two separate states over their boundaries and the natural resources shared by each state.