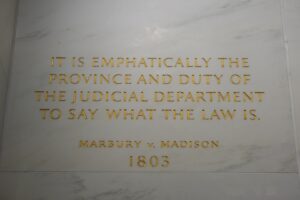 Marbury v. Madison, a Supreme Court Case in 1803 was a landmark case for its use of judicial review, or the right of federal courts to determine the constitutionality of legislation. This decision helped establish the judicial branch as separate and equal to the legislative and executive branches.

In the final days of John Adams’ presidency, he appointed a large number of justices of peace for the District of Columbia. These appointments followed proper procedure. However, when Thomas Jefferson became president, he had Secretary of State James Madison withhold the commissions that were signed and sealed by President Adams. William Marbury, one of the appointed justices, petitioned the Supreme Court to compel Madison to explain his reasoning.

In the case, Chief Justice Marshall argued that the Supreme Court needed to answer three questions. The first asked whether Marbury had a right to the writ that would compel Madison. Marshall ruled that because Marbury had been properly appointed he was due the writ. The next question askedif the courts could grant such a writ. Again, Marshall ruled in favor of Marbury because the courts have the right to issue a remedy for a legal grievance. Finally, the Court asked whether the Supreme Court was the proper court to issue the writ. On this matter, Marshall ruled in favor of Madison.

His reasoning for ruling against Marbury relied on the notion of judicial review. Marbury had petitioned the Supreme Court based on powers granted by the Judiciary Act of 1789. However, upon review by the court, that law was unconstitutional because it gave the Court powers not extended in the Constitution. Marshall argued that when Congress passed laws that were contrary to the Constitution, it was the obligation of the court to rule with the Constitution.

While ultimately Marbury did not receive his commission, this case codified the notion that the Supreme Court can decide on the legality of legislation. This strengthened the power of the judiciary making it equal and separate from either of the other branches.