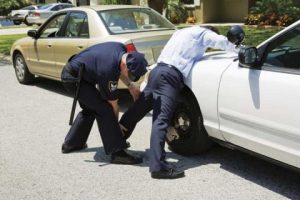 Terry v. Ohio was a 1968 landmark United States Supreme Court case. The case dealt with the ‘stop and frisk’ practice of police officers, and whether or not it violates the U.S. Constitution’s Fourth Amendment protection from unreasonable searches and seizures. The Supreme Court determined that the practice of stopping and frisking a suspect in public without probable cause does not violate the Fourth Amendment, as long as the officer has a “reasonable suspicion” that the person may be committing a crime, have committed a crime, or is planning to commit a crime, and that the person “may be armed and presently dangerous”. The court justified this decision with the clarification that the Fourth Amendment is meant to be applied to gathering evidence, not to crime prevention.

The long road to the Supreme Court began on October 31, 1963 in Cleveland, Ohio when police detective Martin McFadden saw two men, John W. Terry and Richard Chilton, who McFadden stated were acting suspiciously. He saw the two men walking back and forth on the same block, before talking with each other. They repeated this process several times, until a third man joined, and talked with them for several minutes before leaving. McFadden grew suspicious, and decided to follow the men, where they joined once again with the third man. Detective McFadden, who was dressed in plain clothes, approached the men and identified himself as a police officer. He asked for their names, and when, allegedly, one of them “mumbled”, he began to frisk Terry, and discovered a concealed pistol. He ordered the three men to face the wall with their arms raised, and completed the ‘stop and frisk’. He also found a gun in Chilton’s possession. The three men were taken to the police station, where Terry and Chilton were arrested for carrying a concealed weapon. Terry and Chilton were found guilty, but appealed the case all the way up to the federal Supreme Court. The Terry v. Ohio case set a precedent for a number of Supreme Court cases that took place in the following years, the most recent being the Arizona v Johnson (2009).