Date rape drugs refer to the drugs most often used to assist perpetrators in committing a sexual assault, which encompasses any sort of sexual touching or activity that a person does not consent to. This is known as drug-facilitated sexual assault. Date rape drugs are often slipped into a person’s drink when they are not paying attention. Because these drugs have no color, smell, or taste, it is often difficult for one to tell if they have been drugged. However, date rape drugs are very powerful, and they can cause extreme weakness and disorientation so that one cannot defend themselves nor give consent to a sexual activity.

Common date rape drugs (other than alcohol) include rohypnol (flunitrazepam, also called Circles, R-2, Forget Pill, and Roofies), GHB (gamma hydroxybutyric, also called Cherry Meth, Easy Lay, G, Liquid E, and PM), and ketamine (also called Bump, Green, Jet, K, Purple, and Super Acid). Klonopin (clonazepam) and Xanax (alprazolam) are also commonly used date rape drugs. Rohypnol often comes in the form of a pill, GHB in the form of a liquid, white powder, or pill, and ketamine in the form of a liquid or white powder. While rohypnol is illegal in the United States (and often smuggled in from Mexico or Europe), GHB and ketamine are both legal substances, though they are highly regulated and used primarily to treat animals and sleep disorders. 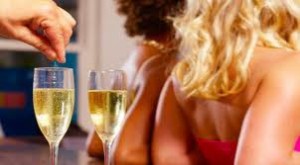 Date rape drugs are commonly used at dance clubs, bars, concerts, and other party venues which is why they are often referred to as club drugs–and can cause one to pass out and have no memory of what occurred while they were under the influence of the drug.

These drugs have several powerful effects, which vary in length. If a date rape drug is mixed with an alcoholic drink, its effect becomes more powerful and can cause serious health problems or even death. Possible effects of these drugs include loss of muscle control and motor skills, loss of coordination, visual impairment, loss of time and identity, dream-like or out-of-body experiences, sweating, nausea, aggressive behavior, speech impairment, sleepiness, loss of consciousness, confusion, numbness, vomiting, memory loss, slow heart rate, low blood pressure, tremors, and seizures.

For more information on this subject, please visit:
www.medicinenet.com

Here are some tips to ensure no one gives you a date rape drug:

If you feel like you have been drugged or if you are a survivor of sexual assault (some signs include a lack of memory from the night before or torn clothes), please know that it is never the survivor’s fault. You should get medical help right away and inform the police.