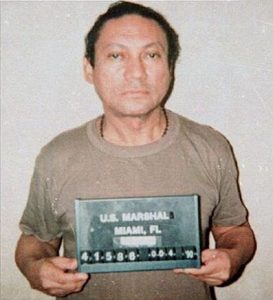 Manuel Noriega, born on February 11, 1934, is the former military dictator of Panama. He was on the CIA payroll from the 1960s to the 1980s, allowing him to run his country how he wanted without much foreign interference. This included working closely with Pablo Escobar and the Colombian Medellín Cartel, forming a government reliant on the exportation of cocaine, primarily to the US. He was also known for murdering those who opposed him.

He began his ascent to power in 1968 when he was made lieutenant of the Panamanian National Guard. In 1983, he promoted himself to full general. He allowed elections to be held starting in 1984, however he rigged them to ensure that he would maintain his de facto rule.

Following the 1989 election, in which Carlos Duque (Noriega’s pawn) beat Guillermo Endara despite reports indicating Endara’s 3 to 1 victory, the United States finally attempted to apprehend Noriega. On January 3, 1990, Noriega surrendered to the US. In 1992, he was convicted of money laundering, cocaine trafficking, and racketeering. Despite a 40 year sentence, he only served 17 before being extradited to France. In 2011, Noriega was extradited again to Panama, where he began a 20 year sentence for the murder of various political opponents.

In 2014, Noriega sued the American video game company Activision for its use of his name and image in the game Call of Duty: Black Ops II. Noriega is unhappy with the depiction, claiming the company made him out to be a “kidnapper, murderer, and enemy of the state.” By October 2014, the case was dismissed.