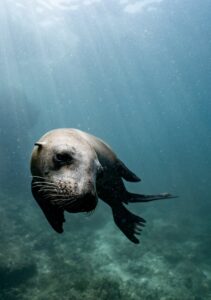 Each year during the Canadian Seal Hunt, a part of the hunting season, thousands of harp seals are slaughtered. Once the Canadian ice allows hunters to navigate it, they begin seeking out the seals. Hunters use guns, knives, and clubs to injure and kill the seals before bringing them aboard their ships.

Most often the victims of this hunt are newborn seals, ranging in age from 11 days to three months. Seals this age are only three feet long and are unable to swim. These younger seals have not learned to protect themselves, and cannot move fast enough to escape the hunters. About 30% of baby harp seals die in the first year because of this inability. The new seal hunting craze has worsened this phenomenon. When baby seals are hunted, fisherman usually club them to death or until they are unconscious. Larger seals are commonly shot with harpoon guns, so the hunters don’t have to risk injury from more capable seals. Once a seal is old enough to defend itself it is killed with a harpoon from a safe distance.

The procedures for seal hunting are very specific but largely unregulated in Canada. After attacking the seal, hunters are required to perform a blinking eye test, where they wait to see if the seal is still blinking before skinning them. After ensuring the seal is dead, hunters drain the blood of the seal by cutting two arteries located by their front flippers. They must wait a minimum of one minute for this process to be complete. Unfortunately, these regulations are not always followed do to a lack of supervision. Some of the seals brought aboard hunting ships to be skinned are still alive, but are skinned anyway. In 2001, a group of veterinarians reported that 40% of seals were still alive when skinned. Although there are new laws in place to protect the seals from this, it still occurs. Despite new laws put in place by the Canadian government, live skinning still occurs.

The greatest problem facing Canada’s seal population is the government’s support of the industry. After the Atlantic Cod disappeared due to overfishing, the Canadian fishing industry collapsed. Fishermen who were once profitable were now desperate for work. The government used propaganda to blame the disappearance of the cod on seals, instead of their own lack of oversight, and began encouraging seal hunting as a replacement. This caused the number of seal hunters, and the number of seals killed, to skyrocket.

Over the past several years, new regulations have been put in place to make the hunt more humane. However, policy makers and the Canadian Coast Guard act in favor of the seal hunters. Coast Guard ships help clear ice so sealing ships can easily move through. They even go so far as to actively assist hunters in locating seals. Government officials hope that the country’s emergence into the seal market will stimulate the economy, but the rest of the world is moving away from the seal trade. In 2009, the European Union expanded a once partial ban on seal products to include all seal merchandise, from seals of any age. Following suit, the Russian Federation made importing any seal products illegal. Regardless of these regulations, and the action of many activist groups, the Canadian Seal Hunt is scheduled to resume November 15. While seal hunting has declined in recent years due to a steep drop in population 70,000 seals were killed during last year’s hunt, similar numbers are expected this season.