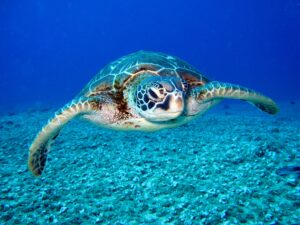 Hunting and trading sea turtles have been a common practice for thousands of years. They have been regularly used for their shells, meat, and eggs which are prized in some cultures. However, excessive hunting coupled with environmental changes have resulted in six of the seven known species of sea turtle becoming endangered.

Today, sea turtles are protected from hunters because of their endangered status. However, this does not stop them from being hunted illegally. Turtle parts can still be sold on the black market, or directly to consumers, through illegal trade. Some political groups are officially requesting that sea turtles be completely removed from the endangered species list, so they can be legally hunted and traded. But with the limited progress made in increasing the population and the continued threat of illegal hunting, sea turtles will soon become extinct if they are no longer protected.

The illegal trade of sea turtles is a well hidden industry. Often these creatures are sold in remote areas that are difficult to locate across international borders, making tracking the turtles nearly impossible. In rare cases, law enforcement officials are inclined to look the other way either because of bribes from poachers or because they live in a culture where eating turtles is a tradition. These situations lead to poachers routinely escaping prosecution.

No matter the economic benefits, destroying the sea turtle population is not worth the damage it would cause on the oceans’ ecosystem. Sea turtles are precious parts of their marine communities, and have much to offer in their distinct niches. Whenever a species is over hunted, or goes completely extinct, it doesn’t just impact them, it changes their entire ecosystem. Even humans will find themselves impacted by the damages that over-hunting will cause. We must use our resources and communities to strengthen nature, because too often we forget we are a part of it.