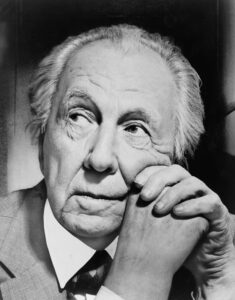 Frank Lloyd Wright is known around the world as America’s most famous architect and one of the most influential designers of the twentieth century. Despite his extreme popularity, one grizzly part of Wright’s past is often overlooked – the 1914 murder of his mistress and six others at his Wisconsin home and studio known as Taliesin.

On Saturday, August 15, 1914, Frank Lloyd Wright was away on business as Martha “Mamah” Borthwick, Wright’s notorious mistress, sat down to lunch on the dining room porch with her two children, John and Martha. They were joined by five of Wright’s employees, Emil Brodelle, Thomas Brunker, David Lindblom, Herbert Fritz, and William Weston, as well as Weston’s son Ernest, all of whom sat together in the dining room just inside the house.

Julian Carlton, the handyman who did general work around the property, approached Weston and asked permission to retrieve a container of gasoline in order to clean some soiled rugs. Weston granted the seemingly innocuous request, unwittingly sealing the diners’ unfortunate fate.

Carlton returned with not only the gasoline but a large axe as well. He then slaughtered Borthwick and her children on the porch, poured the gasoline under the dining room doors and around the outside walls, and lit the house on fire with the others trapped inside. Those who were not immediately burned attempted to break through a window and escape the blaze, but were taken down by Carlton’s axe one by one. Only two men survived the ordeal – Herbert Fritz, who made it out the window first and got far enough away before Carlton noticed, and William Weston, whom Carlton hit but mistook for dead. Fritz reached a neighbor and contacted authorities. They found Carlton alive, hiding inside the furnace after swallowing what he believed to be a lethal dose of hydrochloric acid. He was taken to prison but died of starvation several weeks later, unable to eat due to the acid’s damage to his stomach and esophagus.

Carlton’s motive for the attack was never conclusively determined, as he pled not guilty and refused to explain himself to the authorities before passing away. However, it is most likely that Carlton snapped after learning he would be let go from his job at Taliesin. Witnesses claimed he had been in several disputes with both employees and Borthwick, and that Wright had begun advertising for another worker. Carlton’s wife Gertrude, who also lived and worked on the grounds, further testified that her husband had recently grown agitated and paranoid, and that the two of them were even supposed to travel to Chicago in search of work on the day of the rampage.

Taliesin was rebuilt after the fire, and Wright continued to use the home and studio until his death. Despite its controversial beginnings as the house Wright built for a woman who was not his wife, to becoming the site of the deadliest single-killer rampage in Wisconsin’s history, Taliesin remains open and is visited by thousands of tourists every year.