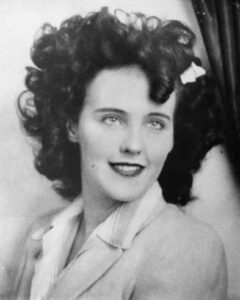 On January 15, 1947 the body of Elizabeth Short was found at Leimert Park in Los Angeles California. A woman who was walking with her two year old daughter through a park when she saw what she thought was an abandoned mannequin. She soon realized that the body was a corpse and grabbed her daughter running for the nearest phone to call the police.

Elizabeth Short’s body had been cut in half at the waist and her blood had been drained out. Her face had been cut from the corners of mouth to her ears to give her what people would call today the “Joker smile”. There were numerous cuts and bruises on her breast and thighs because of whole sections of skin that had been removed. An autopsy showed that she had ultimately been killed because of lacerations and a hemorrhage on her head due to blows to her face.

After it happened close to 50 men and women went to the LAPD claiming to be the killer, this made it very hard for police to determine the culprit. There were numerous suspects throughout the years, but there was never enough evidence to charge anyone. There were multiple theories on the murder and how it could’ve been linked to other murders. Some detectives believed that the same person that committed the Cleveland Torso Murders also killed Elizabeth Short. Another viable theory at the time was that Short’s murder was linked to the Lipstick murders. Many believe that the main reason that the murder was unsolved was because of the media’s interference in the investigation. Officers and detectives stated that reporters were walking over evidence and withholding information that they received from calls to their offices. At one point the reporters were in the LAPD station and were just freely answering phones that could’ve have been tips for the investigation and withholding the information.

Elizabeth Short received the name the “Black Dahlia” as a play on words of the popular movie at the time called the Blue Dahlia. The name was created and popularized by the media and news reporters. A main misconception that was produced by many writers at the time was that she was a call girl, but there was no evidence of that.

The Black Dahlia murder is one of the most famous unsolved murder cases in the world. The gruesome nature of the crime helped bolster its infamy. Over the years new evidence has been found, but many still believe that it is a murder that will never be solved.