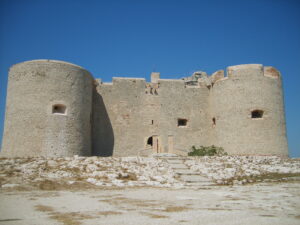 The Château d’If was a prison built on a small island in the Bay of Marseille, off the coast of France. The site was originally used as a military fortress, but had many features that made it an ideal prison.

Escape from the Château d’If is virtually impossible. The waters surrounding the small island are very dangerous, with fast currents that can easily drag even a strong swimmer to their death. A variety of prisoners suffered within the walls of the penitentiary; it held dangerous criminals, thieves, religious convicts, and political hostages for many years. These inmates lived in harsh conditions and it became well known as one of the worst prisons in existence.

While the Château d’If gained a large amount of notoriety on its own, it began to receive worldwide notice following the printing of Alexandre Dumas’ novel, The Count of Monte Cristo, in 1844. It is the tale of a man who spent 14 years imprisoned on the island before finally making a daring escape. The story made for a great fictional read and spread the infamy of the Château.

In reality, no one is known to have ever escaped from Château d’If. Prisoners who spent time there were locked away for many years, often for life. Every inmate received treatment that was largely based on their wealth and social standing, so poor prisoners had a much more difficult time than the rich. Wealthy inmates could buy a higher class cell with windows and even a fireplace. Poor individuals were placed in dark, underground dungeons and forced to live in dirty, overcrowded conditions. Many of the prisoners were chained to walls during their stay, while others were beaten, forced into labor, or even killed.

Today, the Château is still in operation, but only as a tourist attraction. People from all over the world visit and explore the famous prison that served as the setting for a beloved work of fiction and thousands of unlucky prisoners.