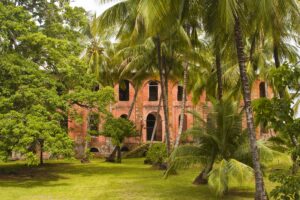 Off the coast of French Guiana is a small island with just 34-acres in its entirety. This island was used as a penal colony for the French from 1852 to 1952. During these hundred years of operation, the site earned the infamous nickname of “The Devil’s Island.”

It was Emperor Napoleon III who originally started this penal colony, and it was used to house the most despised and feared criminals such as thieves, murderers, and political enemies. Prison facilities were located on the French Guiana mainland as well, but the inmates who were thought to be most dangerous were all housed on the island.

Prisoners were brought to Devil’s Island by boat and separated into groups based on the type of crime they were sentenced for. After being placed into their divisions, the prisoners would be forced to endure severe amounts of strenuous labor. They would toil in the unbearably hot tropic sun on projects such as constructing a railroad or clearing areas of tall trees. Those who refused or were unable to meet their work quotas were savagely beaten and denied food and water. Inmates were commonly worked to death under these deplorable conditions. Those who managed the work load were still at risk from the heat, malaria carrying mosquitoes, and the unsafe living environment. Those banished to the island were faced with murderous fellow inmates, cruel guards, and a host of contagious diseases.

Escape from the island was nearly impossible. The only possible paths out were on the waterways, home to schools of man-eating piranha and deadly crocodiles. The other option was to go through the dense jungle that held untold dangers of its own. Even though this prison was considered to be the most difficult facility to escape from, the subhuman conditions led to hundreds of attempts. Only a handful of people were able to successfully break out and make their way to freedom. Most prisoners either died in the process or were recaptured and given even longer sentences.

The few escapees from the island told their stories, and word quickly spread about this nefarious penal colony. In 1938, the French government stopped sending new prisoners there, and by 1952 the prison was officially closed. Though shut down, the legends and stories of this inhumane death trap live on.