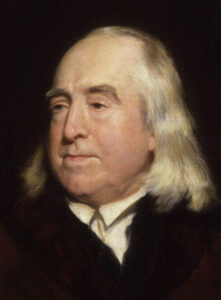 Jeremy Bentham was a philosopher and author who strongly believed in a political system of Utilitarianism: the idea that the best laws for society are those that benefit the largest number of people. He felt that every action any person took should be judged by how it aided or harmed the general public as a whole.

Bentham is known for many accomplishments throughout his life. He produced a large body of writing that influenced and supported Utilitarian theories, was a co-founder of the important Westminster Review publication, helped to establish the University of London, and devised a unique type of prison known as the Panopticon.

Bentham believed that any person or group who carried out acts that were detrimental to society should be punished with imprisonment. He worked on a concept for a prison in which the guards would be able to monitor every prisoner at any time without the prisoner’s knowledge. His theory was that if those who were locked up felt that they were under constant surveillance, they would behave more obediently. Since the prisoners would never be certain if armed guards were watching them at any given time, they would be forced to become model prisoners out of fear of retribution.

The prison that Bentham conceived of was never built, but many architects felt it was a worthwhile and beneficial design concept. Not only would the layout of the facility help keep the inmates in line, but it was also designed to require fewer guards, which would save money. Through the years there have been many prisons that utilized designs based on Bentham’s concepts, but he was always thoroughly disappointed that his actual prison model was never built.

When Bentham passed away in 1832, he had his body preserved and displayed in a custom designed cabinet he called the “Auto-Icon.” He is considered by many to be the “Father of Utilitarianism” to this day.