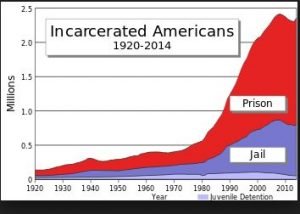 Every year, the United States Department of Justice puts together a comprehensive list of statistics on people who are incarcerated at facilities all across the country. The information is used to gather information about the number of people who are locked up, the types of crimes they committed, and the ethnic backgrounds of the prisoners.

The United States has more people incarcerated than any other country in the world. In 2015, there were approximately 1,526,800 people housed in either a state or federal facility. As high as that number is, it showed a 2% decrease in total prisoners from the year before, making it the lowest prisoner population since 2005 and the largest decrease between years since 1978. The three primary kinds of offenses that prisoners were convicted of were violent crimes, property damage, and drug-related offenses, in that order.

Statistics from 2015 indicate that 7.1% of inmates were females, with the remaining majority of the prison population made up of males. Comparisons with data from 1995 and 2005 indicate that those numbers remain nearly constant from year to year. Out of those locked up, 33.8% were White, 35.4% were Black, and about 21.6% were Hispanic. See 2015 statistics.

Estimates conclude that nearly 1 in every 100 adult Americans will be incarcerated at some point in their lives. However, data indicates that certain groups are far more likely to be arrested and sentenced to prison. One out of every 30 White men between the ages of 20 and 34 are incarcerated, and that figure jumps up to a shocking 1 out of 9 for Black males in the same age range. Similarly, 1 out of every 355 White women between the ages of 35 and 39 are currently serving time, compared to 1 out of 100 Black women.