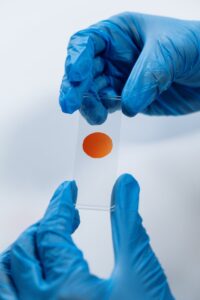 The National Institute of Justice says “DNA collection and analysis gives the criminal justice field a powerful tool for convicting the guilty and exonerating the innocent.” Only one-tenth of one percent of DNA differs from person to person. Although the DNA between people is so similar the small differences can be used to identify an individual, victim or suspect. This DNA evidence is the most important evidence to lawyers, because it is the most accurate method of identifying someone. The Federal Bureau of Investigation (FBI) has chosen 13 points of Short Tandem Repeats to be used as the base for DNA analysis and aside from identical twins, the chances of these points being the same in two individuals is 1 in 1 billion or greater.

DNA analysis is a fairly new technology. The first use of DNA analysis was in the 1980s to convict a man from Portland, Oregon of raping a 13 year old. In this case, DNA samples were taken from the suspect and from the fetus which had been aborted. The DNA was then analyzed and the results were conclusive. The results were conclusive because a fetus has the mother’s and the father’s DNA and common sequences between were found between the accused man’s DNA and the fetus. The accused also confessed and was convicted.

There are different techniques to analyze DNA. Most labs have the ability to test Nuclear DNA, which is DNA that is found in the Nucleus of every cell. There are other labs that have the ability to use mitochondrial DNA analysis or Y-chromosome analysis. One of the first techniques used to analyze DNA was Restriction Fragment Length Polymorphism or RFLP. This technique analyzes the length of repeating bases in strands of DNA. The repetitions are known as Variable Number Tandem Repeats, or VNTRs, due to the fact that they can repeat from up to thirty times per strand, though the number of time it repeats varies from strand to strand. The RFLP technique also requires the DNA to be dissolved in a specific enzyme that helps break the DNA at specific points. In the case of RFLPs, a large sample of DNA that has not been contaminated is needed.

Another method of DNA analysis is Short Tandem Repeat (STR) Analysis . Unlike RFLP, STR analysis can use a smaller sample of DNA. This is because scientists can use a process known as Polymerase Chain Reaction or PCR to amplify or make copies of the DNA and produce the desired amount of material needed. Once the DNA has been amplified STR analysis looks at how many times base pairs repeat at a specific location. This can be repetitions of two (dinucleotide), three (trinucleotide), four (tetranucleotide) or five (pentanucleotide) base pairs. Investigators have found that base pairs of four or five seem to be the most accurate.

A special method to analyze DNA is through Y-Marking analysis or analysis of the Y chromosome. This type of analysis helps identify DNA from different males. Another method that is special is Mitochondrial DNA Analysis. This type of analysis uses DNA from the mitochondria of a cell. It has been found that this type of DNA is most useful is helping to solve cold cases because degraded DNA ( DNA that has been improperly stored or stored too long)can be analyzed and can help find a perpetrator. A new special technique Single Nucleotide Polymorphism or SNP are most often used to determine a person’s chance of contracting a certain disease. Forensic scientists rarely use SNP, but did to help successfully identify victims of several September 11th victims after other identification methods failed.