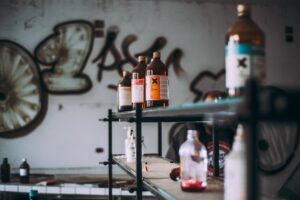 Toxicology is the scientific study of chemicals, specifically poisons, on humans and other living things. It studies the detection and treatment of poisons, as well as the effects these chemicals have on the body.

Although poisons have been studied and written about since the ninth century, the true origin of modern toxicology goes back to the early 1800’s when a man named Mathieu Orfila produced a scientific work titled Traité des poisons: tires des règnes mineral, vegetal et animal; ou Toxicologie générale. Orfila analyzed poison’s effects on humans and created a method of detecting the presence of arsenic within murder victims. His book discussed the techniques he devised, and soon became a commonly used guideline for murder cases in which detectives suspected the use of poison.

One of the first cases to utilize Orfila’s discoveries occurred in 1840, when Marie LaFarge was accused of poisoning her husband. When investigators were unable to find any arsenic traces within the corpse, they called in Orfila to personally run some tests. He found the evidence the prosecution was looking for, and LaFarge was found guilty of murder.

The primary study of toxicology concerns the dosage of poison used in any situation. Almost every substance has the potential to be poisonous given the right circumstances, but whether or not it becomes dangerous depends on the amount of poison involved. One of the first major experts in the field of toxicology, a man known as Paracelsus, devised this concept and created a well known maxim that has been revised to say, “The dose makes the poison.” Simply put, the dosage is the primary determining factor in whether or not any substance is toxic and in how harmful it will be to a living organism.

Modern toxicologists often work with coroners or medical examiners when they perform an autopsy on a suspected poison victim. Toxicologists also provide drug testing services for various purposes, such as determining if a job applicant uses any illegal substances or if an athlete uses steroids to enhance their performance. Their work offers a unique insight into the chemicals found inside a human or any other living creature and into the effects those chemicals have on their host.