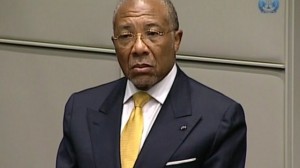 Charles Taylor served as the 22nd President of Liberia from 1997 to his resignation in 2003. Trained as a guerrilla fighter in Libya, he joined National Patriotic Front of Liberia to overthrow the Liberian government of the time. After its collapse, he gained control of a large portion of the country, becoming one of the most powerful warlords in African after the First Liberian Civil War. It was the peace deal that ended the war that got him the presidency in the 1997 election.

During his presidency, he was accused of meddling in another conflict: Sierra Leone’s civil war. Sources claimed that Taylor aided the rebel Revolutionary United Front (RUF) with weapon sales in exchange for blood diamonds. During the eleven year conflict, over 50,000 people were killed. Many were brutally mutilated, with their limbs amputated and viciously scarred by rebels, some who carved their initials in their opponents’ flesh. The RUF also frequently used child soldiers, forcing boys fifteen and under to murder their own families before sending them into battle, forcibly drugged on narcotics to keep them compliant.

Taylor, while he constantly denied the accusations, was connected to arranging attacks for the RUF along with sending weapons; this gave him access to the diamond mines in Sierra Leone’s interior, forcing survivors of attacks into slavery so that they could be mined. With revolts beginning in his own country and indictment brewing from the Special Court for Sierra Leone, Taylor was called upon to resign from international pressure, specifically from the United States. He officially resigned on August 10, 2003 and went into exile in Nigeria. Due to increased pressure to try him for his crimes, the Nigerian government agreed to release him back to Liberia. Taylor attempted to escape, but was caught trying to sneak into Cameroon.

Taylor was tried at The Hague for seventeen counts of crimes against humanity, including murder, rape, and the use of child soldiers. After a long, complicated trial, he was convicted on eleven counts in 2012 and has been sentenced to 50 years in prison to be served in a British prison. Taylor, claiming he is a victim, has tried to appeal, but his sentence still stands. He was the first government head to be tried for war crimes since World War II.