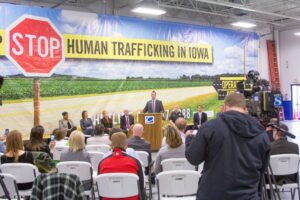 Human trafficking is, according to the Protocol to Prevent, Suppress, and Punish Trafficking in Persons (of the United Nations), “the recruitment, transportation, transfer, harboring or receipt of persons, by means of the threat or use of force or other forms of coercion, of abduction, of fraud, of deception, of the abuse of power or of a position of vulnerability or of the giving or receiving of payments or benefits to achieve the consent of a person having control over another person, for the purpose of exploitation. Exploitation shall include, at a minimum, the exploitation of the prostitution of others or other forms of sexual exploitation, forced labor or services, slavery or practices similar to slavery, servitude or the removal of organs.” Human trafficking is illegal in the United States and worldwide.

In the United States in 2013, California had the most reported calls to report human trafficking.

Human trafficking is one of the focuses of the United Nations Office on Drugs and Crime. Similarly, the organization called the Polaris Project’s motto is, “For a World without Slavery.”

Organizations such as these provide information on how to notice signs of human trafficking. They are physical and mental health issues, as well as unusual living conditions or work conditions, and inconsistent stories.

For more information on human trafficking from the Polaris Project, please visit their website here.

Abraham Lincoln’s Emancipation Proclamation may have abolished slavery in the United States one hundred and fifty years ago, but slavery has by no means vanished from today’s world. In their Trafficking in Persons report, the U.S. State Department estimated that there are currently about 20.9 million human trafficking victims today. According to the State Department, labor exploitation is the largest source of slavery with an estimated 14,200,000 current victims. Sexual exploitation comes second with 4,500,000 victims, and state-imposed labor falls last with 2,200,000 victims. Of all these victims, government agencies and NGOs only managed to free 42,000 slaves in 2011.

The State Department defines human trafficking as “the recruitment, harboring, transportation, provision, or obtaining of a person for labor or services, through the use of force, fraud, or coercion for the purpose of subjection to involuntary servitude, peonage, debt bondage, or slavery.” Individuals do not need to have been relocated—forced prostitution is one form of slavery. Estimations of human trafficking victims differ, however, based on the definition. While the State Department defines human trafficking more broadly and thus has a higher estimation, the United Nations Office on Drugs and Crime estimates that there are currently 2.4 million human trafficking victims. About 80% of them are victims of the sex slave trade.

The young women and girls there had suffered terrible abuse. But with their own drive and determination and with the help of some remarkable women and men they were getting their lives back on track…I met one girl, about ten years old, who asked if I wanted to see the martial arts she had learned at the shelter. As she performed her routine, I was impressed with the skills she had learned; but more than that, I was moved by the pride in her eyes – her sense of accomplishment and strength.

Empowering women everywhere will be a major victory against human trafficking, whether through shelters, therapy, or education. In the case of sex slavery, we must be receptive of the victims and treat them as such: victims, not criminals. An anonymous sex victim told her trafficker at his sentencing, “I walk around and carry the physical scars of the torture you put me through. The cigarette burns, the knife carvings, the piercings … how a human being can see humor in the torture, manipulation, and brainwashing of another human being is beyond comprehension. You have given me a life sentence.”

Outside of the government, other organizations exist to combat this scourge. Not For Sale is a Californian non-profit that provides ways to combat human trafficking through groups, apps, and information. Its app Free2Work scans barcodes to reveal how worker-friendly your favorite brands are. Partnered with Major League Baseball, their Free2Play app pledges donations for baseball statistics. San Francisco Giants pitcher Jeremy Affeldt, recipient of the Roberto Clemente Award for outstanding community dedication and baseball performance, promised $250 for every strike he pitches during the season. In a heartening display of solidarity, Giants first baseman Brandon Belt apologized to Not For Sale President Dave Batstone on June 18th for failing to hit any home-runs so far this season, after having pledge a donation for each one hit. Belt quickly turned his luck around, however, and hit three home runs in three games.

Dave Batstone, President of Not For Sale, created the organization when he discovered that one of his favorite Indian restaurants forced immigrant children into labor and made them live in deadly, unventilated apartments. When a woman forced to work in the restaurant died from a gas-leak in the apartment, Batstone snapped to attention. Shocked to learn that slavery existed right around the corner of him, Batstone dedicated his life to exposing it and ending it everywhere through Not For Sale.

National Human Trafficking Hotline is another non-profit fighting modern human slavery. It combines non-governmental organizations (NGOs) and government information and resources to expedite human trafficking’s elimination in Asia and the Pacific. With an extensive online database of laws, action-plans, and contact information, Humantrafficking.org is an excellent resource to learn more about country-specific slavery.

Government organizations like the State Department and the U.S. Immigration and Customs Enforcement and NGOs like Not For Sale and Humantrafficking.org have completed a lot of good work towards the eradication of slavery, but it is not enough. With over twenty million people worldwide still imprisoned, the work is far from over.