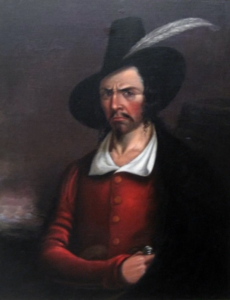 Jean Lafitte, born around 1780, was a French pirate in the United States who was an infamous smuggler. Lafitte and his older brother, Pierre, spent most of their time engaging in piracy in the Gulf of Mexico. They began holding their smuggled goods in New Orleans, Louisiana around 1809.

By 1810, he had started a colony on Barataria in Barataria Bay to house his criminal activities. This colony was large and quite impressive, a criminal stronghold famous to all. Lafitte spent much of his time managing the business side of things, such as outfitting privateers and arranging the smuggling of stolen goods. In no time, seamen were flocking to the island to work for the brothers.

In the War of 1812, when the British were going to attack New Orleans, Lafitte pretended to side with them, but warned the US and helped defend New Orleans. After the threat was gone, however, he reverted to his criminal ways.

He created Campeche, a commune in Texas, where he and his men settled and continued their piracy. In 1821, the USS Enterprise went to Campeche to challenge Lafitte’s authority, and Lafitte went with them.

What happened to Jean Lafitte is often contested. Some say he died as a pirate; other reports note that it seems that he continued his life as an ordinary citizen. Many stories speak only of a mysterious treasure that Lafitte left behind, and where that treasure could be today.