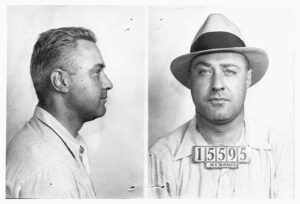 George Kelly Barnes was born in the late 1890s in Memphis, Tennessee. His family was fairly wealthy, and he lived an ordinary life until his enrollment at Mississippi State University. At first, he was only in small trouble, earning poor grades and racking up demerits. However, after falling in love with a woman named Geneva, he decided to quit school altogether. They quickly found themselves in financial trouble, so Kelly schemed up a plan and began working as a gangster after separating from Geneva. At the time, he was only 19.

In 1927, he fell for a woman named Kathryn Thorne, whom he later married. Kathryn Kelly, was a criminal in her own right. She bought him a machine gun, which spawned his nickname, “Machine Gun Kelly.”

His crimes were mainly centered on taking advantage of Prohibition’s laws and on robbing banks. However, his most famous crime was a kidnapping.

With the help of a man named Albert Bates and the planning skills of his wife, Kelly intended to kidnap an oil man named Charles Urschel. They had planned to ransom Urschel for $200,000, but upon arrival at Urschel’s, had found two men instead of one, and had taken both, unsure of who was who. The other man was Walter Jarrett.

After receiving the ransom, the released Urschel. With Urschel’s help, the FBI found their way to the house where he was held. There, they discovered that Kelly and Bates were the kidnappers. With these clues and the serial numbers on the ransom money, they managed to find the kidnappers.