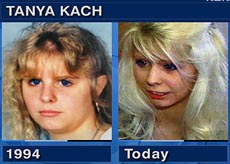 Tanya Kach was just a normal girl whom was reported missing on February 10th, 1996. It all began at Kach’s school, Cornell Middle School in McKeesport, Pennsylvania. A security guard named Thomas Hose began to talk and become friendly with Kach. Eventually they were so close that Hose would take her out of class to talk. As the relationship grew stronger, Hose convinced Kach to run away from her home where she lived with her family and come live with Hose. Kach agreed to this and left in February 1996.

In the beginning, Kach lived in a second story bedroom because Hose lived with his parents and son. She couldn’t leave the bedroom at all, even to use the restroom, so Kach would have to use a bucket that was left in the room. After a few years, Hose decided to create a new identity for Tanya. She would go by the name “Nikki Allen”. Hose introduced “Nikki” to his family as his girlfriend and explained that she would be moving in with him. For the six years Kach was living there she could only occasionally leave the house and would have to return within a strict timeline.

Ten years after she originally ran off with Hose, Kach escaped. Kach was able to escape with the help of a neighbor when she revealed her true identity. She had come to a realization that the relationship she had between herself and Hose was not normal. After escaping and coming home, Kach wrote a book about her experiences called, Memoir of a Milk Carton Kid: The Tanya Nicole Kach Story.