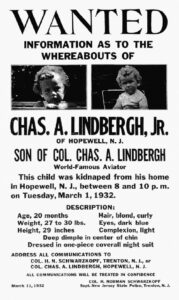 The Lindbergh kidnapping is one of the most notorious cases of the 20th century. As a direct result of the case, US Congress passed the Federal Kidnapping Act popularly known as the Lindbergh Law. The act granted federal law enforcement the power to purse kidnappers who travel across state lines with victims. The theory being that federal law enforcement could do a much more effective job not being confined to rules of a particular jurisdiction.

On March 1, 1932, 20 month old Charles Augustus Lindbergh, the son of world famous aviator Charles Lindbergh, was taken from the second story of his home in Hopewell, NJ. At approximately 10 PM, the child’s nurse discovered that he was missing and alerted his parents.  Upon further inspection of the nursery a ransom note was discovered on the windowsill. The crudely written note demanded that $50,000 be delivered to a yet to be disclosed location.

During the primary crime scene investigation mud was discovered on the nursery floor along with several indistinguishable footprints. Sections of a makeshift wooden ladder which had been used to reach the second story nursery were also found. As soon as 10:30 PM that evening, news stations were broadcasting the story to the nation. The New Jersey State Police assumed charge of the investigation headed by Colonel H. Schwarzkopf, the father of Gulf War leader General H. Norman Schwarzkopf. Schwarzkopf was appointed by none other than FBI director J. Edgar Hoover.

Lindbergh positioned himself at the head of investigation without much resistance from Schwarzkopf. He accepted Dr. John F. Condon, a retired Bronx school teacher, as the intermediary between himself and the kidnapper. On March 10, 1932, Condon commenced negotiations with the kidnapper using the alias “Jafsie.”

Condon met with the alleged kidnapper, a man who called himself “John,” on several occasions at a Bronx cemetery. During their final meeting, April 2, a $50,000 ransom was handed over to “John” in exchange for the safe return of Lindbergh Jr. Instead, a note was given to Condon. It claimed that the boy was safe and aboard a boat, named “Nellie,” off the coast of Massachusetts. The boat was never found.

Then, on May 12, 1932, the body of the missing boy was discovered. A truck driver had accidentally stumbled upon his partially buried remains approximately 4 miles away from the Lindbergh residence. A coroner determined the boy had died from a blow to the head and been dead for about two months.

The following events would prove crucial in search for Lindbergh Jr.’s killer.

First, in 1933, as a result of the Depression, an executive order was enacted stating that all gold certificates be returned to the treasury. It so happened that about $40,000 of the Lindbergh ransom money was in the form of these certificates. It was surmised, before the ransom delivery, that anyone in possession of that amount of gold certificates would draw attention to themselves. After the enactment of the executive order, this would prove especially true. Second, the serial numbers of the bank notes had been meticulously recorded prior to the ransom hand-off. During the manhunt, all New York City Branch offices were given pamphlets containing the serial numbers of the Lindbergh ransom notes and advised to be on high alert for any matches.

Investigators got their big break when a New York bank alerted the New York Bureau Office to report the discovery of a $10 gold certificate. The certificate was tracked back to a gas station. A filling attendant had received the certificate from a man whose description was strikingly similar to that of others of a man passing Lindbergh notes in recent weeks. The attendant, finding the $10 gold certificate suspicious, wrote the man’s license number on the bill. This led the police to Richard Hauptmann, a German born carpenter. A search of Hauptmann’s home uncovered $14,000 of the Lindbergh ransom money, wood identical to that used to make the makeshift ladder, and John Condon’s phone number. He was arrested on September 19, 1934.

“The Trial of the Century” commenced on January 2, 1935 in Flemington, New Jersey to a crowd of sixty-thousand observers. It lasted five weeks. After eleven hours of deliberation, the jury found Bruno Richard Hauptmann guilty of first degree murder and sentenced him to death.

On April 3, 1936, Bruno Richard Hauptmann was put to death in the electric chair. To this day there are those who question if the right man was executed for the crime.