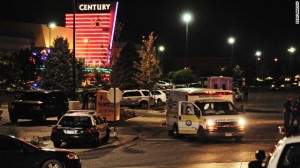 When one goes to the movies, they expect to see all of the action on screen. However the audience viewing the new Batman movie in a local Aurora, Colorado theater experienced a real life horror story. On July 20, 2012 James Holmes, age 24, stepped into the Aurora Movie Theater dressed as the Joker from the film fully armed. Holmes threw a canister into the theater before he began firing. According to CNN, moviegoers ran to escape from the gunman whom shot at random while walking through the theater. Holmes fled to his car parked behind the theater, where police arrested him.

The New York Times reported that twelve victims were killed and 58 were injured. Holmes first court case was in Colorado on July 23. He was charged with dozens of accounts of first degree murder and attempted murder, as well as possession of explosive devices. After many court hearings with Holmes’s lawyer and the judge going back and forth, the actual trial was scheduled for October 2014. Holmes has been transferred back and forth from Colorado Mental Health Institute and jail.

James Holmes was originally from San Diego. He had dropped out of a doctoral program at the University of Colorado medical school. USA Today reported that Holmes had been described as a quiet, standoffish person, well-mannered, and “normal” guy. No one expected for this intelligent young man to commit such an awful crime.