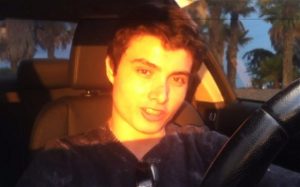 On May 23, 2014, Elliot Rodger killed himself and six other people, in addition to injuring an additional 13 people near the University of California, Santa Barbara. At the beginning of the rampage, Rodger stabbed three people, all UCSB students, to death in his apartment building. He then drove to the Alpha Phi sorority house and banged on the door for several minutes, though no one ever answered. While he was trying to gain entry to the sorority house, the first 911 call of that day was placed, timing the incident at 9:27 PM. As he was walking away from the sorority house, Rodger shot and killed Veronika Weiss and Katherine Cooper. He also shot another woman who was with them who survived the attack. Rodger then returned to his car and drove to a deli two blocks away, where he shot Christopher Martinez. As he drove away, he continued to shoot rounds from his car. He also shot at a police officer on foot, who shot back. While continuing his driving rampage, Rodger hit a bicyclist, and shot more rounds at pedestrians. He continued to drive, shoot pedestrians and police officers until he hit another bicyclist, as well as several cars. Rodgers stopped his car, and when police removed him from the car, he had died of a self-inflicted gunshot wound to the head. The entire timeline of events took place in less than 20 minutes.

Before he left for the sorority house, Rodger uploaded a video to YouTube, entitled “Elliot Rodger’s Retribution”, in which he outlined his planned killing spree. He emailed the video, in addition to a manifesto, which he titled “My Twisted world”, to his friends and family members, including his therapist. Soon after the killing spree, the videos and manifesto became available online. In the video and the manifesto, his motivation for killing appears to be a sense of anger and frustration over his inability to find a girlfriend, in addition to his hatred of women, interracial relationships, and racial minorities. Rodger himself actually was the product of an interracial relationship, as his mother is Malaysian. Of the six victims of the killing spree, all of them belonged to at least one of the groups that Rodger heavily criticized- women and racial minorities. Many of the surviving victims also belong to such groups.

In preparation for the attack, Rodger had legally purchased three guns. Investigators have pointed out that he likely had no issue passing any background tests to purchase a gun, as there was nothing in his history that would have raised any red flags.

Rodger was raised in the affluent suburbs of Los Angeles, California. By the time that he was eight years old, he was regularly seeing therapists. According to Rodger’s journals, he was “increasingly bullied” in high school. When he was 18, Rodger began to reject the psychiatric treatment he was receiving, and became more isolated, and avoided friendships.

Three weeks before his killing spree, Rodger’s parents became concerned after watching his YouTube videos and contacted the police, reporting that Rodger had a planned attack and weapons to assist him. Police officers went to Rodger’s apartment and interviewed him, though they did not do a search for the weapons and did not arrest Rodger after he told them that it was a “misunderstanding”.

In response to the killings, there was a social media frenzy. On May 24, the Twitter hashtag #YesAllWomen was created to give women an open forum to discuss their experienced with misogyny, as a response to those who do not believe that Rodger’s attack was motivated by his hatred of women. Since it’s creation, Twitter users have used the hashtag in over 1.5 million tweets.