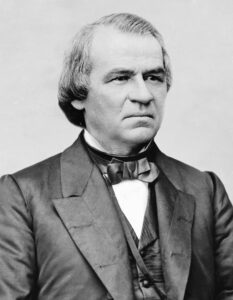 (1808-1875)
The only Southern senator to refuse to resign from the Senate in the lead-up to the Civil War, Andrew Johnson was a Unionist, the Vice President of the United States, and later became the 17th President in 1865 after the assassination of Abraham Lincoln. There were two successive attempts by Congress to impeach Johnson, the first in 1867.

The first attempt originated from a long list of complaints against the president, which resulted in a failed vote by the US House of Representatives, 57-108, against removing him from office. The second and successful impeachment attempt occurred in the House in 1868. It was the first impeachment of a president in US history. That attempt was based on Johnson’s alleged violation of the Tenure of Office Act in the matter of his appointment of the new Secretary of War.

After passing the House, a total of eleven articles of impeachment were laid out before the Senate and the “Radical Republicans” who were angered by Johnson’s vetoes of civil rights bills and by his placatory attitude toward the former Confederate states and his attempts to reincorporate them quickly back into the Union. However, due to their displeasure with the proceedings, the Radical Republicans decided to vote against conviction, bucking public opinion and their own party. The Senate acquitted Johnson by a single vote.