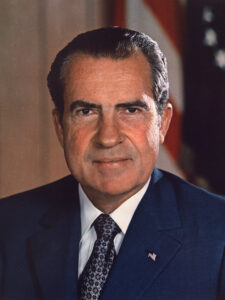 (1913-1994)
Richard M. Nixon, a Republican and the 37th President of the United States, faced the near-certainty of impeachment due to various secret and illegal activities conducted by his Committee to Re-Elect the President campaign.

On June 17, 1972, five men, whose connections to the Committee were later exposed, were caught trying to break into Democratic presidential campaign headquarters in the Watergate Hotel in Washington, DC. The ensuing scandal, known as the Watergate Scandal, involved top members of the Nixon administration, many of whom resigned or became liable for prosecution. Watergate cost Nixon political support during his re-election campaign and made him extremely vulnerable to potential impeachment.

On July 27, 1974, the US House of Representatives voted to impeach him on an article of obstruction of justice arising from evidence that he knew about and had tried to cover up the attempted break-in and that he had tried to convince administration officials to stop the cover-up probe launched by the FBI. This first step toward impeachment was bi-partisan, with 27-11 voting in favor of the article of obstruction. Nixon resigned from the presidency on August 9, 1974, the only president of the US to resign from office.