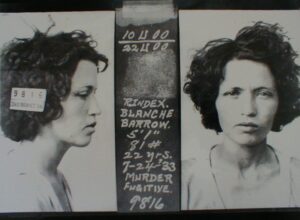 Though Bonnie and Clyde received most of the media attention during their crime spree, Blanche Barrow played a major role in the gang’s operations. Blanche became Clyde Barrow’s sister-in-law when she married his brother, Buck Barrow, who was heavily involved with Bonnie and Clyde’s crimes. Blanche is said to have never wanted to live a life of crime, and she even convinced her husband to return to prison voluntarily after he escaped in 1930. Blanche was proud of Buck for finishing his prison sentence, but she was disappointed when he fell right back into a life of crime shortly after his release.

In 1933 the gang was involved in a shoot-out. Despite objecting to his life of crime, Blanche helped Clyde drag her husband back into the car after he was shot in the head by police. Buck barely survived, and Blanche sustained severe injuries to her eyes when police shot at the car, shattering the windows. Soon after, another shootout led to the arrest of Blanche and Buck.

For remaining faithful to Buck, Blanche served six years in prison and suffered permanent visual impairment. Buck passed away in the hospital before he could be sentenced. After her release, Blanche remarried and lived the rest of her life in peace.