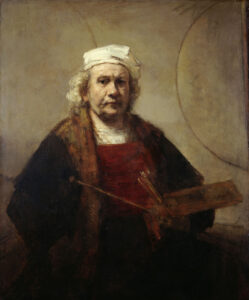 On December 22, 2000, three men walked into the Swedish National Museum, one of them holding a machine gun. They held up security and went in for the artwork they had planned to steal. It seemed like a simple plan, walk in, subdue the guards, take what you want and leave; but this was one of the most elaborate heists in history.

At the same time as the robbery, two cars exploded across town because of bombs that the robbers planted to divert police resources. Once an alarm was sounded, responders found their tires had been slashed. The gang went in with the machine guns, knowing these would be the most effective in intimidating the museum security. After they quickly retrieved the paintings from the museum they retreated to a motorboat waiting nearby, acting as their getaway vehicle.

The stolen paintings were a self-portrait by Rembrandt as well as two paintings by Renoir, Conversation with the Gardner and Young Parisian. All together, the robbery was worth somewhere between $30-36 million. However, it was unclear what the intent was for the stolen paintings. They were too distinctive to be resold and the black market was under heavy surveillance after the robberies. Shortly after the paintings disappeared, the museum received a ransom note for $3 million.

Within a month, it was believed all of those involved had been caught. Ten arrests were made for involvement in the heist. The leader of the heist is believed to be a then 42-year-old Russian man. Two lawyers who had acted as middle men and demanded the ransom were arrested in concert with those who had stolen the paintings. Every other criminal arrested was charged with attempted extortion and aggravated robbery, but all pleaded innocent.

In 2001, the first of the paintings resurfaced. A drug raid led to the discovery of Renoir’s Conversation with the Gardner hidden in a bag. Rembrandt’s self-portrait was later discovered in 2005 in a hotel in Copenhagen. It was reportedly found during an attempted sale when the police intervened. The operation that found Renoir’s Young Parisian is unknown, but the FBI reported that it had been found before Rembrandt’s self-portrait. The recovery of all the artwork stolen in the heist is a rare occurrence: in most cases the art is destroyed or sold and never found. Though their elaborate plan allowed the thieves to escape with the paintings, it involved so many moving parts that only one had to crumble for it all to collapse.