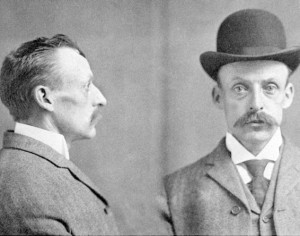 Albert Fish was first known as Frank Howard. He responded to an ad looking for work placed in the newspaper by Edward Budd. Edward Budd was an 18 year-old boy determined to make something of himself. Frank Howard arrived at Budd’s doorstep with a job offer. He stated that he would like to have Budd come work with him at his farm, telling the story of his six children and how his wife had left them.

Edward was looking forward to having a job and providing for his family, and Howard even offered a job to Budd’s friend, Willie. Howard planned to come pick them up a few days later to take them back to his farm to begin work. When Howard didn’t show, he provided a hand-written note explaining that he would be in touch in a few days. He came over for a visit the following morning and the family invited him to stay for lunch. During his visit, Howard spotted Budd’s younger sister, Gracie. Explaining that he had to attend a birthday party before he could take the boys to the farm, he asked if Gracie would like to join him. With his gracious attitude and friendly nature, the Budds gave Gracie permission to attend the party. That evening, Howard did not return and Gracie vanished. The family reported her disappearance to the local police and an investigation began.

No leads were discovered, partially because Frank Howard didn’t exist. The Budd family received a letter with a description of the mutilation and murder of little Gracie. The note matched the handwriting from the original note sent to them earlier. During the time of the investigation and before the letter was received, another child vanished.

Billy Gaffney, a four year-old boy playing with his neighbor, who was also named Billy, disappeared and the three year-old Billy stated that “the boogey man” took Billy Gaffney. The police didn’t take the statement to heart, and instead ignored it. Shortly after the disappearance of Billy Gaffney, another little boy also disappeared. Eight year-old Francis McDonnell was playing on the porch with his mother when a grey-haired, frail, old man walked down the street muttering to himself. The mother noticed his awkward demeanor but did not report anything. Later that day, while Francis was playing at the park, his friends noticed that he walked into the woods with an elderly grey-haired man. When his family noticed that he was missing, they organized a search. Francis was found under some branches in the woods, badly beaten and strangled with his suspenders.

The manhunt for the “grey man” began but despite many efforts, he vanished. The letter that was received by the Budd family was investigated and was found to contain an emblem of the New York Private Chauffeur’s Benevolent Association (NYPCBA). All of the members were required to obtain a handwriting test for comparison to the letters from Howard. A janitor came forward to admit that he had taken some sheets of paper and left them in his old rooming house. The landlady was able to confirm that an old man matching the description had lived there for two months and had only checked out a few days earlier. The former tenant was identified as Albert H. Fish. The landlady also mentioned that he wanted her to hold a letter that would be arriving from his son. Detectives intercepted the letter at the post office and were contacted by the landlady that he would be coming to get his letter. The lead detective was able to capture Mr. Fish.

Many confessions and testimonies were heard by law enforcement and psychiatrists. Mr. Fish described how he wanted to lure Edward Budd and his friend Willie to his farm to kill them. However, once he laid eyes on Gracie, he changed his mind and desperately wanted to kill her. He took Gracie to the train station and purchased a one-way ticket for her. After the ride to the country side, he took her to a house. While at the house he told Gracie to wait outside and she picked flowers. He went to the second floor of the house and removed all of his clothes. When he called for Gracie to come upstairs she was frightened by him and called out for her mother. Mr. Fish choked her to death. Following her death, he decapitated her and cut up her body. He took parts with him when he left, wrapped in newspaper. Police were able to locate the remains of Gracie based on his confession.

Albert Fish had many run-ins with police in his lifetime. However, each time charges were dismissed. He discussed the details of the murder of Billy Gaffney, describing how he tied him up and beat him. He even admitted to drinking his blood and making a stew out of his body parts. His attitude was not like those of people with psychosis. He was calm and reserved, which was out of the ordinary. He confessed that he wanted to inflict pain and have pain inflicted on him. He taunted and preyed on children, mostly boys. He also had a compulsion to write and send obscene letters. An x-ray determined that he placed needles into the region between his anus and scrotum, and at least 29 needles were discovered.

In trial, the defense argued that he was legally insane. They used many descriptions and testimonies to prove to the jury that he was mentally ill. However, the jury didn’t believe this. He was considered to be a “psychopathic personality without a psychosis” and he was found guilty after 10 days of trial.