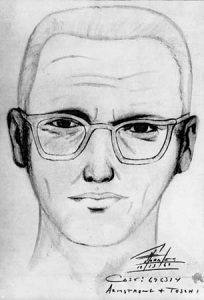 The Zodiac Killer is one of America’s most infamous serial killers. During the 1960s and 1970s, Zodiac murdered at least five people, often couples in secluded areas, near San Francisco. His first victim was Cheri Jo Bates. He wrote a confession about her, including a message to “beware…”

The media has been captivated by the Zodiac Killer because of his relationship with the media. Zodiac began sending coded messages taunting police to various newspapers very soon after his first murder. He signed these letters with a circle with a plus sign over it, his symbol. He infamously sent a cipher that said, “This is the Zodiac speaking. By the way have you cracked the last cipher I sent you? My name is…” This was followed by a series of 13 symbols that were supposed to be his name, encoded. To this day, this code has not been cracked.

The Zodiac Killer case remains unsolved. Although suspects have come forward – and continue to come forward, to this day – no one has been confirmed as the actual Zodiac Killer. Some of the more famous suspects include Arthur Leigh Allen, who was dismissed because of his handwriting sample, and Earl Van Best, Jr., more recently, who was accused by his son in a tell-all book, The Most Dangerous Animal of All.