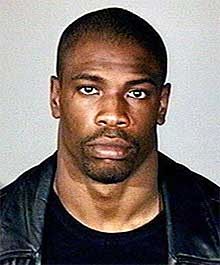 Famed NFL player Lawrence Phillips, born May 12, 1975, was sentenced to ten years in prison in late 2008. The conviction stemmed from an offense two years prior of assault with a deadly weapon. Phillips had been arrested and was convicted in 2006.

The sentence was long-delayed because of other legal issues, involving a car accident and psychological issues stemming from “blind rage.” He has also been convicted and was entering a guilty plea in a domestic abuse case, which he had since tried to withdraw because of the three-strikes law present in California.

The actual incident of his assault was that he drove his car into three teenagers after losing a game – this stemmed from his anger, apparently, at the outcome of the football game.

His sentence was increased from ten years to thirty-one after the domestic violence cases finally settled, adding 21 years to his already-long sentence.